There's something fishy going on... 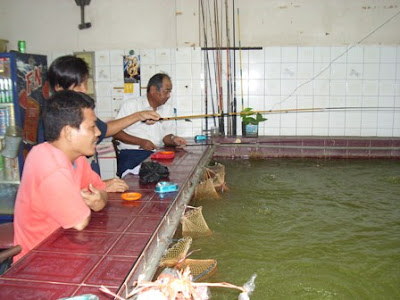 I went out with Emily (who runs the laundry I've been using) and her friend Rita (a remedial therapist) last night and had a fun time. They picked me up from the hotel and we went first to visit Emily's brother James, a film and video producer who was editing a film on (I think) Johor Bahru. We ate at an open-air food court in a suburban area. Lots of very unusual dishes and great juices... Emily has travelled in India, Cambodia, Vietnam... I like her a lot.

I'm hoping to have a massage from Rita when I come back from my trek.

We had a look at one of these fishing places. It's open until 2 am and costs a few dollars to hang out with a rod and fish for prawns and other critters. We also called into a pet shop, where there was a gorgeous maltese/shitzu belonging to the owners. Rita bought some Frontline for her dog, also a maltese/shitzu. Emily has had four bichon frises but said it was too painful when they died, so she no longer has a dog.

Met up with Sim at 6 am today for a run as planned. Her friends Alan and Akia, who I met yesterday when we all found ourselves in the same tambang, also came along. We headed off along the waterfront. Yesterday, when it looked like Sim wasn't going to show, I'd asked a guy who was running past to keep an eye out for a Chinese runner who looked like she might be waiting for someone. When I'd given up waiting and started to run, he was coming back and said he hadn't seen anyone. Today, soon after we started running, he appeared again. When he saw me he pointed to Sim and said, 'This is who you were waiting for yesterday?' It turned out they run together all the time! (They are both retired public servants.) So, Johnny joined us and we were now five runners.

Sim and I decided to do the 10K run on top of the 2Ks we did along the river, and Johnny and Akia went some of the way with us before heading back. Our route was through the suburbs, over a long bridge, and then back along the main road. We cut down to the kampung the way I went yesterday and got a tambang (my Chinese friends just call them sampans) back over to the south bank.

Sim is 60, and a good strong runner. Her daughters are a doctor and a pharmacist. A couple of years ago Sim climbed the Pinnacles, which I've been worrying about. After talking with her I felt reassured that I might be able to manage it. In any case, there's only one way up and one way down, so if I lose my nerve I'll just wait it out.

My visit to Miri on the 19th to speak with people from the Society of Sarawakians Writing in English is now a major event. Apparently, I'm a "rare gem" to come into the lives of wannabe writers in English in northern Sarawak, and Jennie Soh isn't letting the opportunity slip by. I'll meet her when she flies into Kuching from Miri late on Sunday night, and before I fly out to Miri first thing the next morning. The "New Sarawak Tribune" is now also on the story!

It's all very surreal. I spent all day working on a job for my client in Singapore and keeping my feet on the ground.
Posted by Robyn from Oz