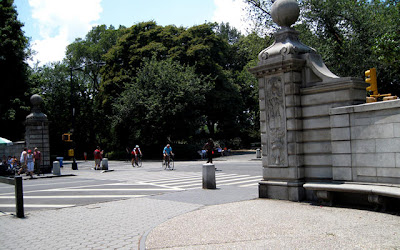 Engineers' Gate, 90th Street and 5th Avenue, New York: The start of most of my morning runs

I arrived back in New York about ten weeks ago, in summer, and today it's snowing! I can hardly believe what I'm seeing, but I know it's cold enough. At 8 am I ran the last 10 miles (16 km) of the New York marathon course with a bunch of friends and it was damned cold by the time we'd finished and I was walking home. It's now settling on the trees and ground as snow. Gorgeous.

Too much has happened since my last post on 4 October to catch up now. I feel so at home here and I go about my day like any other New Yorker, so it doesn't really feel like I need to keep a travel blog. That will change soon when I fly south for the winter.

My family had a scare mid-month when Mum, in Australia, had serious heart issues and had to have a pacemaker installed. Once the procedure was done she was out of any danger, which was a great relief for us all. I've changed my plans so that I can go back in late February for a week.

Some highlights from the past month: Staten Island half marathon (my best half mara time since 2009 and a third place in my age group); New York Film Festival, including "Once Upon a Time in Anatolia" and "The Ballad of Mott the Hoople" (which I saw with Albury pal Mary-Jane); my own mini film festival: "Bombay Beach", "To Be Heard", "Texas Killing Fields", "The Way"; catchup birthday meals and a run in Toronto with Hong Kong pals Sarah and William, and Frances; Niagara Falls marathon: a personal best time of 4:13:00 and a fifth place in my age group on a beautiful day; catchup with my "B" mate Di (Bali, Berlin, Broadway/Brighton Beach); and pre-dawn runs in Central Park three mornings a week with some or all of Maria, Sung, Sarah, Lissy, Heather, Joe, Marie, Steve, John....

I'm really going to miss friends from 96th Street: Chloe, John Boy and the rest of the crew.
Posted by Robyn from Oz No comments: 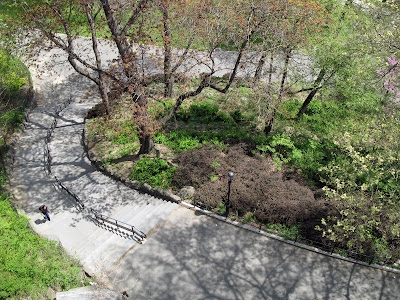 I'm counting all my blessings and feeling very grateful for my good health and the special people in my life.

I've run three races since my last update: the Fifth Avenue Mile, an 18-miler (30K) and a half marathon (13 miles/21.1K). My best effort was the mile, which was 5 seconds faster than last year and was of "national class" for my age, according to the New York Road Runners' calculations. I also took 8 minutes off last year's time for the 18-miler, and gained 5th place in my AG in both races. Had brunch after the mile with my Dead Runner mate Josh, last seen in Maine last year. This weekend's half marathon was a 6th place (out of 57). I followed that with a scenic 10-mile run with Maria yesterday in Central Park, up to Morningside Heights and down the Hudson before returning through the park.

Made a return visit yesterday to Shiloh Baptist Church in Harlem with some visitors from Oz, including Liz, an in-house editor for one of my main clients. The pastor used a very detailed baseball analogy (it now being the season playoffs), which was pretty funny. He was swinging a baseball bat and the congregation was getting very worked up. I'd been to a baseball game on Tuesday night with this bunch (and runner pals Heather, Joe, Joe's brother David, Lauren, Steve and Tim) – New York Mets vs Cincinnati Reds – in Flushing, Queens. It was a lot of fun doing The Wave and being pumped up by the music.

I've signed on for next year's Green Mountain Relay (I did this 200-mile event in Vermont in 2009) after being talked into it by team leader Tavia at lunch recently. I also caught up this past week with another former GMR teammate, Tamar (for brunch and later a movie). Our team in 2009 was called "New York Running Chicks and a Few Dudes".

I've been up very early most mornings for regular training runs in the park with some or all of the 5.30 a.m. crew: Maria, Sung, Lizzy, Sarah, Sun, Steve, John, Heather and Joe. Caught up with Joanne for a lunchtime run when she came into town last week from Pelham, and with Marie, just back from a cycling holiday in Sardinia. Had a massage appointment with Marie on Friday.

I saw the play "War Horse" on the recommendation of one of my authors. Fantastic life-size puppet horses. Some 8 million horses died during the First World War. The play includes scenes of trench warfare, and of horses being caught up in the barbed wire. Very harrowing.

Visited the New York Art Fair the week before last and was relieved not to feel compelled to buy something! I've also been continuing my movie streak with the New York Film Festival at Lincoln Center: On Saturday I saw "The Separation" (Iran) and "The Loneliest Planet" (USA/Germany). Both were excellent. Tamar and I saw the German film "3" on Friday down in the East Village. Albury artist pal Mary-Jane is visiting New York for a few weeks and we saw "The Help" after our walk in the park got rained out last week.

I'm feeling very tired tonight and will soon be in bed with a book. It's cold and damp outside, and I don't need to be anywhere but here. Hallelujah!
Posted by Robyn from Oz No comments: