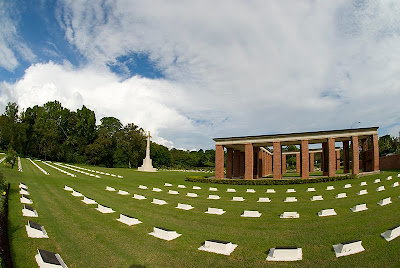 Instead of staying the last night of the trek at a longhouse an hour upriver from Kampung Medamit, I asked Han to negotiate a price for me to go by longboat down to Medamit, from where I could get a van to take me to Limbang. This was all because I had no dry clothes to change into! The chief of the area ferried me downriver. If it hadn't started to pour with rain halfway through the trip, I might have felt a bit like Katherine Hepburn in "The African Queen". Instead, I just felt very soggy!

The air-conditioning in the vehicle that took me on to the market town of Limbang was fierce, so I was soggy and shivering by the time I checked into the commercial traveller-type hotel that was home for the night. It was the best available in town and was very ordinary. I bought some cheap clothes in a shopping centre attached to the hotel and after a hot shower I felt a lot better.

The next morning I checked out all the wet and dry markets around the main part of town, then headed out to the airport.

In Miri, Jennie Soh collected me from the Mega Hotel for dinner with her husband Matthew, daughter Cheryl (a perky businesswoman who spent five years studying in New Zealand), her NZ partner Chris and their NZ colleague Oliver. The three of them run an IT business. Miri is an oil town. Shell seems to run the place.

Jennie picked me up at midday on Saturday for lunch. We then went to Pustaka Miri, where there was a notice up saying: "A Moment with Robyn Flemming from Australia: A collaboration project by SOSWE (Society of English Writers Northern Zone Miri) & Pustaka Miri".

There were only about 20 people, so it wasn't as scary as I'd feared. I talked about my career and about travel writing, and answered questions.

After the talk the mayor of Miri, Lawrence Lai, presented awards to some students who had won a writing competition and also presented me with a gift.

Today I flew up to Labuan. I went straight out to the War Memorial to see the plaque with the name of Dad's Uncle Alf, who died during the forced march of Australian prisoners across Borneo in 1945. His body was never found, but if his spirit is there, he's in a good place. It's by the sea, and the place is well maintained and very peaceful.

I walked back to the hotel along the sea. Lots of families were out having picnics and barbecues for Father's Day. I wished a few of them who greeted me a "Happy Father's Day"!

After a quick look around the town—it's a duty-free port and offshore financial centre—I've been working.

The thing to do here is scuba diving. There are four great wrecks, one of which, the Cement Wreck, is apparently "the world's most colourful and photogenic wreck".
Posted by Robyn from Oz