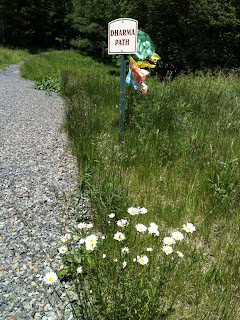 I've been able to strap work into the backseat this past month, instead of having it in the driver's seat. While it's been great not to be under constant pressure, I'm now keen for the pace to pick up again. I have a planned holiday coming up in August, so enough already with the unplanned one!

Most days I've been able to see a film or visit a gallery. Cindy Sherman has a new series on show in Chelsea (a nice pairing with the retrospective at MOMA). I also saw new works by Gilbert & George and Anish Kapoor. (I loved his paint-firing cannon, which I saw in Mumbai early last year.) I also was bowled over by Judy Chicago's "The Dinner Party", which is on permanent display at the Brooklyn Museum. The big Keith Haring works look great, too.

Films: "Moonrise Kingdom" (by Wes Anderson, who made "The Royal Tenenbaums") is a real treat. "Found Memories" (Brazil) is a small film about finding one's place, and about photography. "OC87: The Obsessive Compulsive Major Depression Bipolar Asperger's Movie" is a documentary by a filmmaker whose career was disrupted by these disorders. I saw the very powerful Palestinian film "Five Broken Cameras" with writer friend Lisa, and "Jiro Dreams of Sushi" with running pal Natalie. I also loved "The Intouchables" (France).

Just three weeks into June I've run races in Central Park to celebrate Israel (4 miles), women (10K) and Portugal (5 miles), and a 5K trail race up in the Bronx. Natalie, Maria and I took second place in each of our age categories in the 5K, which we celebrated over dinner with Joe and Steve. I sign up for races so that I'll do the training, which I really enjoy. I love the routine of 4 am alarm call, 5:10 am greeting from the night concierge, and the 5:30 am meet-up with Maria and whoever else is running that day. Dead Runners Susan and Mary also sometimes join us now, which is fun. I've also had a run on the trails in Central Park with new pal Lori, a singer/songwriter/novelist I met through a writers group.

A week ago I went by train up to Scarsdale to have lunch with Selma and Murray, friends made in Santiago in December. Sometimes people just "take", and I've enjoyed their company every time I've seen them.

My first real excursion since I arrived back in New York was up to Woodstock for three days last week. Each summer, my friend Lisa rents an apartment over the "carriage house" on a small property by the reservoir that supplies water to New York, 90 miles to the south. I stayed in town at the Woodstock Inn on the Millstone, where a stream ran past my back door. It was very peaceful, and the lawns and gardens sloping down to the stream looked very lush after recent rains.

We visited the Tibetan Buddhist Monastery near Overlook Mountain, and then walked up to the scenic lookout. Really stunning views across the valley to the Hudson River. This is where the Hudson River painters, such as Thomas Cole, developed the first really American school of painting in the 1800s. 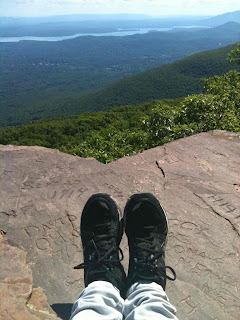 There are some historic sites where once-grand hotels stood. Travellers would come upriver by steamboat, and were then transported by carriage and steam train to the cooler mountain resorts. Cars and roads put an end to that form of travel. This area, the Catskills, is still very popular as the site of many kids' summer camps, as well as for hiking. 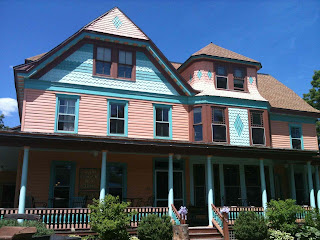 I loved the architecture in Woodstock and Tannersville: very funky shapes, with the weatherboards and ornamentation painted in groovy colours. I found it very interesting, though, that nearly every photogenic view was marred by heavy black power lines slung low across the roads.

Lots of art, some challenging walks, yummy food, beautiful sunny days, and a little bit of retail therapy. What's not to like about Woodstock?