Travel broadens the behind 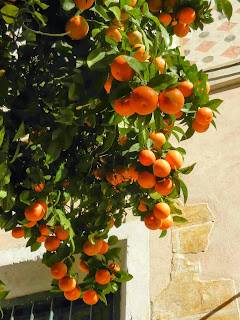 I'm really enjoying the milder weather in southern Spain after it got very cold in New York. Budapest, where I spent five days, was also bitterly cold. I caught up there with my friend from September, Jules, who is back in Budapest for a few months with her husband David. We had dinner four nights running!

I also had a checkup with my dentist. The rest of the time I worked and nursed a cold that seems to want to hang around. I managed to visit my favourite rice pudding store, where the girl who used to serve me in September remembered me. I also caught up with Linda, who rented me the last of the three apartments I stayed in on my first visit and another of whose properties I'll be renting from next August for a month. I'm still crazy about Budapest and am looking forward to going back in the summer.


From Budapest I took the train to Vienna for an overnight stay before my flight to Seville.

I'm loving Seville. The apartment I'm renting for two weeks is in a fabulous area overlooking the Murillo Gardens and on the edge of Barrio de Santa Cruz. 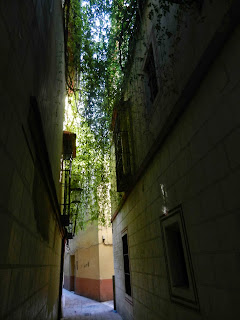 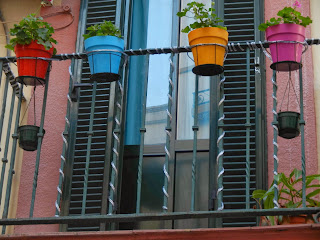 And the food. I seem to have given in to my sweet tooth here. This morning I had a small slice that tasted like a fig and pistachio crumble. It was heavenly. I'm trying to find out what it's made of. The caramel flan I had at dinner last night was the best I've ever had. A homemade ice-cream store around the corner has a goat's cheese and quince flavour that was pretty amazing. I've also had squid and other local dishes at a couple of tapas places, but I'm yet to try the place downstairs, which comes highly recommended.

This morning I went to the Arab baths, which are just a few streets away. It's too expensive to visit regularly or for a full treatment, but it was very nice to hang there for an hour and check out the decor while being pummelled by water jets or floating in some of the hot pools. 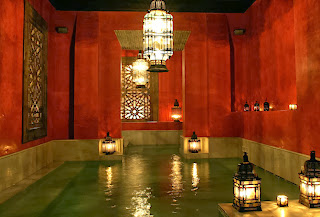 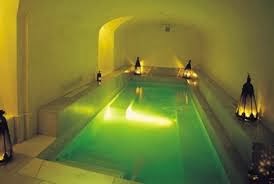 Seville Cathedral is the largest Gothic cathedral in the world and the biggest Christian cathedral after St Peter's and St Paul's. I went up to the top of the bell tower for views over the city. 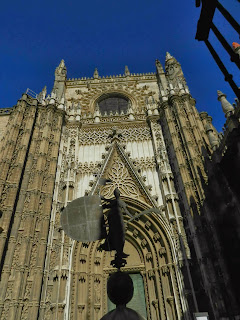 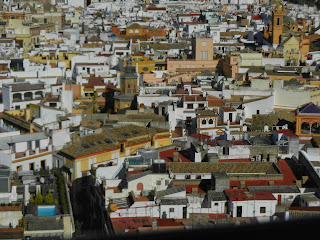 I get hopelessly lost trying to walk and follow a map at the same time, and it took me a few attempts to actually find La Macarena yesterday, which is an area west of the Centro area. I was pleased to find the wooden building known as "The Mushrooms of the Incarnation", designed by a German architect and built just a couple of years ago. Part of the rationale for the design was to preserve some archaeological ruins that were discovered on the site. 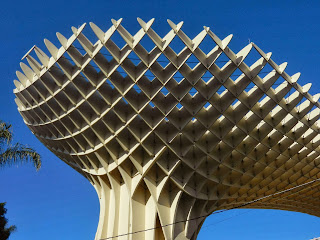 The Plaza de Espana is fabulous. I loved the little tiled benches devoted to the various provinces of Spain. 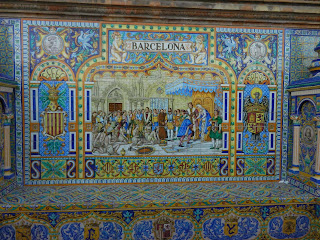 I have quite a bit of work to get through while I'm here, so I'm fitting in breaks of a couple of hours a couple of times a day to go exploring. There's a lot to see and do. I'm just biting off small chunks as and when I can, but I won't get to see everything. A lot of the fun is just in walking around. I'm glad I came.

I haven't had a run since I left New York, but I'm hoping my chest cold will clear up this week and I'll feel like getting out there and doing some miles. If I'm going to keep finding delicious sweet treats, I'd better get my arse moving! 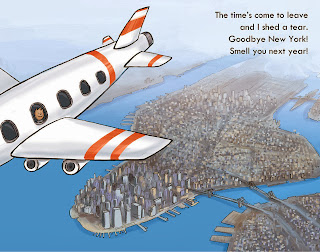 If anyone reading this blog gets impatient waiting for updates (hi, Dad!), there is always the option of friending me on Facebook. That’s where the daily stuff happens. Sometimes, it’s hard to find the time to come up with an angle for a blog entry. But today, as I get ready to fly back to Europe after ten weeks in New York, my theme is gratitude.

Often, wherever I am, my main focus is on my daily routines (working, running, catching up with friends, walking for hours, seeing films) and pressing concerns (my cash flow!). But I’m never not aware that I’m incredibly lucky to be able to live the way I am, and to experience some of the world’s remarkable places as a resident, rather than a tourist. I’ve spent up to five months a year in New York since 2009, so I really have a broadly based life here now. But each time I come, there is something different. Some of the new people I meet become special friends. This time I stayed on much later than usual, so I’ve been hunkered down against the cold weather. I’m grateful that we had some snow yesterday, and for the beautiful sunny day today.

I’m grateful for my clients, who continue to send work files off into cyberspace often without knowing where in the world I am when I work on them. I’m also very grateful when they pay my invoices!

I’m grateful that wonderful films and documentaries continue to be made, and that they pop up on my radar. I’ve seen a whole bunch of films during this visit, but my favourite was “Breakfast With Curtis”.

I’m grateful that I remain an uninjured runner, and that my times are still good enough to earn me age group placings (fourth out of 84 in my AG in the Philadelphia half marathon a few weeks ago).

I’m grateful that I don’t need a whole bunch of stuff to live this way. Apart from a small parcel of summer clothes I sent ahead to Kuching to await my arrival in March, I’m heading off into the next adventure with only a medium-sized suitcase and a small carry-on case that will hold my laptop bag.

And I’m grateful for the friends from all stages of my life who are my virtual travelling companions.

As I will be travelling quite a bit over the next few months, to some new and fascinating places, I’ll try to update this blog more frequently.

Happy holiday season to everyone!!
Posted by Robyn from Oz too No comments: