I'm meant to be training for the New York City marathon, but I seem just to be doing the tapering part. Since the Wees returned to Sarawak I've been focusing on my workload and haven't managed to get out the door for even one run.

Just a week or so after we walked the Cinque Terre trails there was a rock fall that injured a party of four Australians and closed the most popular trail, the Lovers Walk. You just can't do anything about ending up in the wrong spot at the wrong second...

Clare invited me to her house, bits of which date back to the 1400s, for her birthday lunch. The house is up on the hillside on the south side of town. The area has a very village feel, with narrow roads lined with villa walls and old apartment buildings, but it's actually just minutes from the Arno. 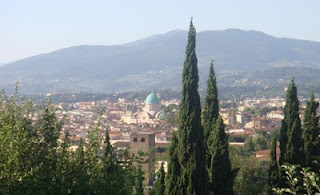 From a hillside above Florence

Absolutely delicious food, and really nice company. There were seven women. Clare's son, Leoni, did the serving; he was very sweet. I spent most of the time talking with Alison, who is from Seattle and is a film/documentary buff and dog lover. (She has a shitzhu named Lola.) Some years ago she wrote young adult, choose-your-own adventure books and now has her finger in many pies here in Florence. I also talked with Sheila, who lectures in art history.

I've visited the Uffizi and Accademia galleries to see some of their Renaissance and earlier art treasures, and Palazzo Strozzi for a big survey of Italian art in the 1930s. For some light relief I went to the Odeon with Bettina, who owns the apartment where I've been staying, to see a documentary about Woody Allen. 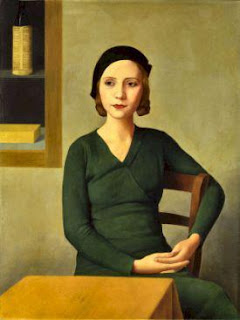 Antonio Donghi, "Woman at the Cafe"

Had a coffee with Carrie, whom I met through Clare. She designs bags and other "gorgeous things" (to quote Eddy from Ab Fab...) and has been living in Italy for nine years.

I finally found time to climb to the top of both Giotto's Bell Tower and the Duomo, to see Brunelleschi's dome up close. Both of these are right next to me. Fabulous views from both. I could just see my balcony. I'm reading Ross King's book about the building of the dome in the 1400s. Amazing. 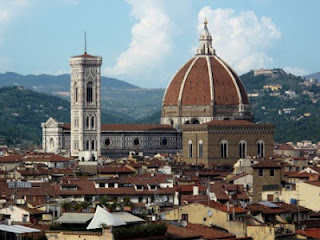 Giotto's Bell Tower, and Brunelleschi's Dome atop the Duomo

Most of the time I've just been living in my neighbourhood. I really like Florence; it's a very liveable city. So I'm coming back next year for another month, this time in the spring.

When in Florence, do as the Florentines do 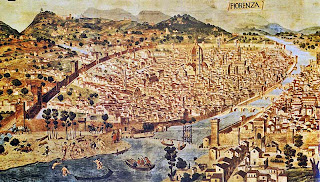 I've been living la dolce vita in Italy for the past fortnight: mixing a heavy workload and pleasure on the banks of the Arno in Florence (Firenze).

I broke the journey from Iceland with a couple of days in Milan. It was my first time there. My hotel was within a short walking distance of a lovely piazza and park, Sempione, where there were lots of runners out over the weekend. I didn't manage a run, but I walked a lot around the inner city. Big crowds at the Duomo, where the body of the Cardinal of Milan was lying in state. Just beyond is the warren of streets that make up the fashion district. I checked out a big graphic design exhibition, and a fabulous one called "Kitsch", at the Triennale.

By train to Florence on Monday, a fortnight ago, where I have an apartment for the month right beside the Duomo. Brunelleschi's Dome looms over my little balcony. It's an area heaving with tourists and tour groups, but that's to be expected when there are stunning architectural treasures like Giotto's Bell Tower and the Duomo just a few steps away. I'm very close to the Arno River and the Ponte Vecchio, a dozen fabulous museums, two great fresh-food markets, a good supermarket, and countless leather goods stores. There is amazing art and architecture everywhere. Gelato is sold on every street corner. Locals ride rickety old bicycles over the cobblestones in the piazzas. Everywhere, I hear Italian being spoken, the most beautiful language in the world. The bells from the clock tower sound out the day. 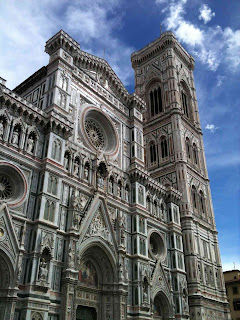 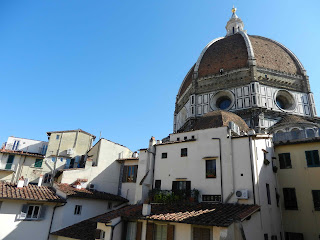 Brunelleschi's Dome as seen from my balcony

My adopted family from Kuching, the Wees, left this morning after a visit of just over a week. They are interested in everything and hardly paused for breath between excursions. I joined them when work deadlines permitted, including on two day trips out of town. The first was to the walled towns of Monteriggioni and San Gimignano, and to Siena to see the Piazza del Campo, the huge sunken piazza around which the Palio di Siena, a horse race dating from medieval times, is run twice a year. All very beautiful, ancient places.

Our second trip was to the Cinque Terre (the five villages of Riomaggiore, Manarola, Corniglia, Vernazza and Monterosso), on the coast of Liguria. We scored the most amazingly beautiful day to spend walking along the coastal paths between the villages that hug the rugged cliffs and travelling back to Riomaggiore by ferry. The houses are brightly painted so as to be visible from the sea when weary fishermen are nearing home. I'd love to go back and spend a couple more days walking there and hanging out eating seafood, walnut tart and gelato. 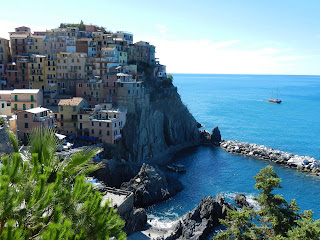 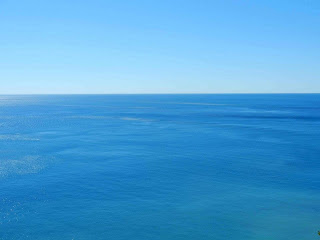 The main galleries in Florence are still on my to do list. I did manage to see, with Sam and Sara, a huge exhibition about Marilyn Monroe, and some wonderful shoes(!),  at the Ferragamo Museum. 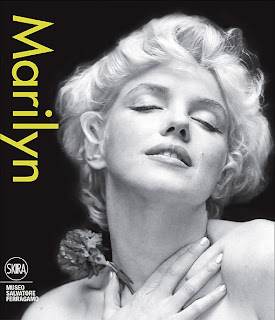 We spent a night at the opera – saw "Carmen" performed in the very intimate Anglican church St Mark's, with five performers, a pianist and a very funny MC – and an evening at the art deco Odeon cinema, where we saw "The Bourne Legacy". We had a sunset picnic by the graveyard of Sante Miniato al Monte church, above Piazzale Michelangelo, with views over the city; and a bus trip to Fiesole, which straddles the ridge to the north of town and dates back to pre-Roman times.

Fabulous to catch up with former Albury pals Sue and Neil, who came over to Florence for the day from Bologna. If they hadn't moved to Port Macquarie in 2009, I may not have thought of leaving Albury when I did. A good lunch with them and the Wees at Caffe Ricchi, in Piazza Santo Spirito, and a look through the flea market.

Min and I had four quality, hour-plus runs in the time they were here. Sara and Sean joined us for bits of two of them. We've run along both sides of the river, and up into the hills. Our last run (two hours' duration for Min, three hours for me) was along the perimeter of what had been the city walls to the east, north, west and south gates. We saw the sunrise from the heights above Piazzale Michelangelo, then came down to the river for a lot of criss-crossing of the bridges, including the Ponte Vecchio multiple times, for my last hour. Fabulous. Breakfast after two of the runs was at a little coffee place in the Santa Ambrogio market that the Wees had discovered soon after they arrived. Their apartment overlooking Sante Croce was on the third floor of a building that dates back to the 1400s.

Through a connection in New York I've met an English artist here. Clare Lillingston does beautiful paintings based on patterned motifs. I now have a copy of her book, Patternistic, and I'm hoping to see some of her work before I leave. We had a long talk over lunch at Caffe Ricchi last week, which I really enjoyed.