It aint over until it's over 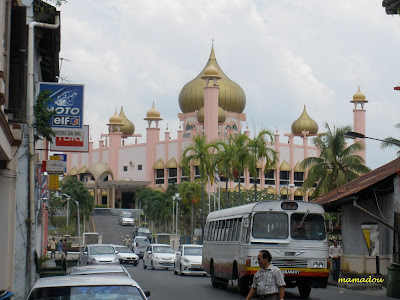 I'm perfectly OK now, but I burned and then crashed (literally) in my race yesterday afternoon.

I overheated, got the staggers, and then apparently passed out. I have no memory of what happened after I first started lurching around, until I came to surrounded by blokes from the mosque. My only physical injury was a big lump on a left knuckle. I don't recall seeing any other runners pass by, which makes me think I might have wandered off course. For about 20 minutes I lay propped up against the roadside embankment, where I vomited, panted, and answered questions. A couple of blokes fanned me with bits of cardboard.

I begged a lift to the finish line back on the waterfront, and two blokes took me in their car. I was disappointed to see it was less than a kilometre away. The St John's Ambulance people there didn't know what to do with me. When I said I was going to be sick again, someone handed me a container the size of a soap dish. I brushed it aside, spread my feet, and vomited a huge spray all over the pavers.

An ambulance arrived, and we went (with the siren blaring) to the Kuching Specialist Hospital where I spent a couple of hours on a drip. On the way, Rita gave me some treatments and held my hand, while Emily and James went back to my hotel to get my passport and some clothes. They have been *amazing* friends.

It was a hot day, and there were hills. I should have taken water if I wasn't sure there'd be some available along the course. By the time I was in trouble, I wasn't thinking right.

A lucky escape. A damned shame about the medal, though!

It just goes to show that, in a race, it aint over until it's over.

Yesterday, Emily and Rita and I retraced my steps from the last part of the course I could remember. When I "came to", I was about 500 metres off course. I apparently fell at some stage, and must have staggered through traffic. I was headed totally in the wrong direction. We talked with some people from the kampong near the mosque who had been there. They had seen me staggering and had stopped me and sat me down. They gave me something to drink. That's when I vomited. They were understandably confused by my thinking they were involved with the race. I must have been off the planet for 15 minutes or more. Given that I went into a kind of coma, it's possible I had heat stroke, and not just heat exhaustion, brought on by dehydration in the hot and humid conditions.

But I still won a medal. It turns out I was in a category of one "VIP/Guest" running the 7K. However slowly I had jogged it, I would have come first.
Posted by Robyn from Oz