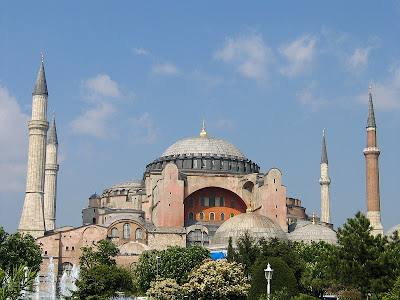 I’m writing this in Canakkale, the jumping-off point for my visit to Gallipoli for Anzac Day remembrance services. I arrived in a roundabout way yesterday from Istanbul, where I’ve spent the past three weeks. My ferry to Bandirma was cancelled due to high winds, which put a spanner in the works. However, fate was at work… I got chatting about possible alternative plans with a fellow passenger, a uni professor, who was supposed to be giving a speech in Bandirma, and ended up being offered a lift in the car his sponsoring university sent to rescue him. A very nice bloke, with whom I hope to stay in touch through Facebook.

I spent the night in Bandirma and came to Canakkale yesterday (180 km) by very comfortable coach for a tiny fare. If I needed any further reason to plan to spend time travelling around Turkey, that was it.

I’ve been working in Istanbul, but have also settled in and made it home. I was lucky that my visit coincided with the Istanbul International Film Festival. I saw eight films. They were all in cinemas near Taksim Square, so I got to explore that part of town. I also made a young friend, Ufuk, who was a volunteer for the festival. She helped me with tickets and we spoke a number of times and are now friends on Facebook.

I also visited Istanbul Modern, the main art gallery; took a Bosphorus boat cruise; and checked out Santa Sophia (which I could see from my bed), the Blue Mosque, the Royal Palace and Basilica Cistern in my neighbourhood of Sultanahmet. And I've been buying silver jewellery :-))

I got into a routine of having morning runs in Gulhane Park, just a three-minute walk from my home in Istanbul, Agora Life Hotel. Great people there. I’ve felt very welcomed by everyone: Kadir, Ifan, Isa, Furkan …

I think Turkish people are incredibly friendly. I’ll definitely be back for a few months, hopefully in mid-2012.
Posted by Robyn from Oz No comments:

A walk along Lake Geneva: Days 4 and 5 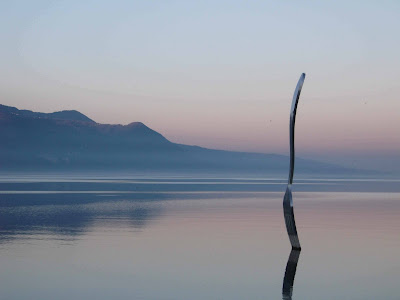 I'm catching up after my blog has been blocked for three weeks...

I took the train from Vevey back to Lutry on Friday morning to meet Jacques at the waterfront for day 4 of my walk. The sun was back out after being drizzly the day before. We walked through an area of vineyards planted on the very steep hillsides and on every other possible surface. Some lovely villages clustered among the vines, with cellars open for tastings and sales. We ate lunch at a lovely terrace restaurant in Epesses, perched high above the lake. Jacques peeled off at St-Seraphin to catch the train back to Lausanne and I carried on to Vevey.

Yesterday was a stunning day, beginning with a pink and blue dawn complete with sleeping swans on the lake. I loved this amazing fork sculpture. The walk was mostly lakeside, and the kilometre or so just before Montreux was fantastic: gorgeously colourful flowerbeds and lots of bamboo art. In Montreux I had a coffee and croissant before heading back to the lake for the last hour of the walk: to Chateau de Crillon and on to Villeneuve. The weather couldn’t have been more beautiful. As I walked into Villeneuve I watched a couple of hang-gliders landing.

It felt a bit odd to have finished.

I took the train back to Lausanne, packed all my gear, did some work and then had a final dinner at Belleview with Liliane.

What a fabulous month.
Posted by Robyn from Oz No comments:

A walk along Lake Geneva: Day 3 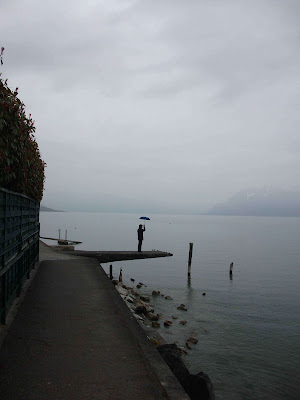 I still managed to get lost twice during today's walk. The day started with clear views across to the Alps, with Mont Blanc visible for the first time this month. In 2007 I spent ten days walking in and out of the valleys that surround Mont Blanc. It was my first long-distance walk. Loved seeing it again today.

Very beautiful scenery along much of the way today.

The weather changed after my lunchtime stop in Ouchy.

I love this photograph, which I took between Pully and Lutry. The guy was just standing there looking straight ahead. I didn't have time even to zoom in, but now I'm glad. I like the composition. His umbrella is so tiny... And I like the way the eye moves down from the umbrella to the poles in the water.

The hotel where I'd wanted to stay in Lutry was full, so after a bit of dithering I took the train to Vevey, where I'm staying at a hotel I noticed two weeks ago when Jacques and I drove through here on our way to Montreux. I'll go back to Lutry tomorrow morning to meet him for our walk through the vineyards, then will come back here for the last night of my walk.
Posted by Robyn from Oz No comments: