I’ve been back in New York for a month. Again, I broke the flight with a night’s stay in Dublin and a visit to the hair salon I use there. (In May I actually took a bag of dirty laundry to Dublin for washing when the hotel I was staying at in Paris wanted to charge me 100 euros(!) and I couldn’t find anywhere else to do it for me.) It's autumn and cold now in New York, but the days are beautiful and sunny. 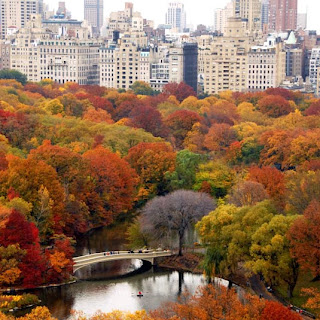 It’s been a big month.

I’ve caught up with old friends, and with some newer ones made when I was here in the summer (June and July). I’ve also had an opportunity to go for a walk in Central Park with Max, my dog friend from upstairs, and Ellen. Max won’t allow me to take him to the park when it’s just him and me; he insists I take him straight to the pet store.

My running training is back on track. In a 5-mile (8 km) event yesterday I ran my fastest race pace of the year and scored a second place in my age group (out of 41 women). I also ran a half marathon in Central Park a week after I got back. My time was slow. I have just one more race (a 5K next weekend) to get guaranteed entry to next year’s New York City marathon, to make up for the one I missed last year when it was cancelled because of Hurricane Sandy. Hopefully, there won’t be any hurricanes, blizzards or other hiccups between today and Sunday, and the 2013 marathon goes off without a hitch. I know quite a few people running it this year.  I downscaled my planned Philadelphia marathon (in three weeks) to a half marathon, as I hadn’t done the necessary slow buildup when I was in Europe in August and September. There are a few of us going to Philly for one or other race and I’m looking forward to it.

I had a birthday this month, which is always nice.

I’ve taken advantage of the great cinemas, as usual, and have seen a bunch of films. Something different this time was a celebrity encounter of the 3D kind when my friend Diane and I recognised and spoke with the actor Jeff Daniels at a matinee session of “Gravity”.  My only other known sightings have been Alec Baldwin and Ferris Bueller. I mean, Matthew Broderick.

A week or so ago I was invited up to Greenwich, Connecticut, by a woman I met in Bali in February. We spoke for about 5 minutes then, and for about 5 hours last week. We spent a couple of hours kayaking on Long Island Sound and checking out waterfront houses owned by rich folks. Laurette is a designer (mainly of fabrics) and her husband Kit is a photographer. A really fun day.

With former model friend Brigitte I saw the “Queer History of Fashion” exhibition at the Fashion Institute of Technology. That seems to be our museum, as we saw the big “RetroSpective” exhibition there in the summer.

I’ve been going to a Writers meetup group on Mondays. There are thousands of meetup groups in New York. There is never any reason to feel alone here, as you could share any or all of your interests with someone! The writers group is pretty focused. Each person reads a piece of writing and gets feedback, and then gives it when others read their work. There are only five or six people, so there is time for some close analysis.

I found the feedback very useful when I read a few pages from Patrick’s and my novel in progress.

The collaborative writing process is fascinating. Patrick is 100 per cent committed to this project, as am I. We have done a ton of preparation, with nearly daily Skype sessions over the past two months developing the characters and the story line. It’s still fluid, but we basically know what’s going to happen and how to get there in our storytelling. We know our characters really well. We are also discovering that some things are being handed to us on a platter. We know what scenes we have to write, and who best to take the lead in writing each one. Then I massage it all together, look at where the gaps are that require Patrick’s input, and he supplies that text. I do another draft, then Patrick reviews that, and we slowly reduce the number of yellow highlights as we resolve the remaining issues. I’m sure that when the first draft is done, we’ll move a whole lot of stuff around again, but we are making great progress in producing an actual first draft of our book. It’s so much fun. It feels blessed. It’s a great story. And I couldn’t wish for a better partner in this project than Patrick. 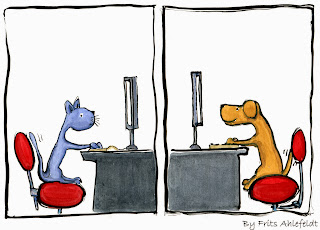