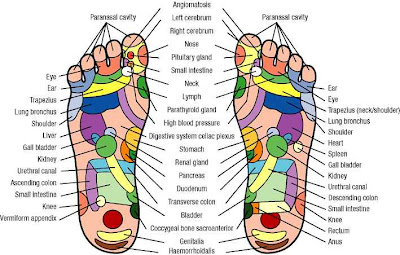 Wah! Foot reflexology really hurts! Or does pain mean I'm in bad shape? I had a 90-minute session with a young girl whose fingers were so strong I reckon she could crack walnuts one-handed. I asked her to lighten up a little, but she just couldn't do it. A good thing it was dirt cheap.

I worked for four hours this morning, then had a cultural few hours visiting museums: the small Art Museum, which had some great sculptures of big birdlike creatures made out of found objects and recycled cans; the main Sarawak Museum, with models of dwellings of Sarawak's tribal peoples, fauna, etc; and the museum extension, where there are exhibits on Sarawak's history, which goes back to Neolithic times. From 1841 it was under the administration of the "White Rajahs", beginning with James Brooke. I had dinner tonight at a place on the waterfront named after him.

Lunch was in one of my favourite streets, Leboh Carpenter, at a little eatery called Madam Tang's that has Sarawak laksa as one of its specialties. My young waiter was a tranny, with huge false eyelashes, some sort of amazing contact lenses, and a great toss of the head. The laksa was as fabulous as she was.
Posted by Robyn from Oz