What an amazing year it's been! This time last year I was in Santiago, Chile. I'm still in touch with some of the people I met there.

From Chile I returned to a wintery New York for about a month, where I ran the Manhattan half marathon in a blizzard. I then went to Texas for a get-together of the Dead Runners Society, which I've been a member of since 1996, and which included running the Austin half marathon. To Oz via Venice Beach for a quick visit to Albury before joining pal Joanne in Singapore. We took the train up through Malaysia to join the Kuching Wees in Kuala Lumpur for another half mara. To Sarawak for a couple of weeks, then to Bali, again with the Wees. This was the first of four consecutive weekends of competing in a half marathon: in Bali; Rotorua (NZ), where I stayed with my father; Vancouver (Canada), where I caught up with pal Sarah; and in Portland (Oregon), where Dead Runner friend Nangel and I ran the Hippy Chick half marathon.

On to New York, which really feels like home, for two months of training with great friends and racing over short distances (4 to 6 miles). A quick flit down to St Kitts in the Caribbean to meet up with Renee, a writer whose book about selling up and sailing off into the sunset I'd been told about and really enjoyed.

On the back of the summer training in New York I ran my best half mara time since 2009 in the Reykjavik half marathon held in August. I scored a third place in my age group against runners from all over Europe. The week before the race I spent on a trek in the volcanic interior beneath a massive looming glacier. Made friends with runner Maggy, originally from Namibia.

Florence in September was gorgeous. The Wees joined me there for 10 days. Min and I got some runs in around town, and we made some sightseeing trips to Siena, San Gimignano and the Cinque Terre. Met and spent time with Bettina, owner of the apartment I rented, and with artist Clare, and was chuffed to catch up with Albury best pals Sue and Neil. En route to Milan I stopped in Bologna to catch up with "B" buddy, Di. (We met in Bali in 2010 and have since caught up in Berlin, Brighton Beach in New York, Bologna ... and recently Melbourne.)

Back to New York for the rest of the autumn racing season. The Staten Island half was my ninth for the year. Hurricane Sandy devastated parts of New York in late October, leading to cancellation of the New York City Marathon, which would have been my fifth marathon and my second one in New York. Two days later I flew to Dublin, where I learned of a 25K race in Cork. An enjoyable run and a first place in my age group. Caught up with pal Marc, whom I met in Chile, and who showed me some of the country around Limerick and the west coast.

The final two half marathons for the year were in Penang, where I celebrated a joint Year of the Dragon birthday with Min and Sam and the Kuching contingent; and in Singapore (another first place). I'd flown with the Wees from Kuching, where we rested up for a week after Penang, for our fourth half marathon together in four cities for the year, and my 12th in 12 months in nine countries.

Besides all the training and running, I spent time with special friends in Santiago, New York, Reykjavik, Florence and Ireland, who all help make the world feel like my home. I saw lots of wonderful art and architecture, enjoyed some amazing theatre, walked through stunning urban and wilderness landscapes, read lots of great books, and watched many wonderful films and documentaries.

I've managed to stay on top of a demanding workload, and feel immense gratitude to my clients for continuing to send me interesting jobs. Some new doors opened during the year through referrals.

In Australia for the end of the year I spent some time with my mum and visited my home town for a few days over Christmas. It was a great chance to see family and good friends there, as well as my dogs Butch and Charlie, who are happy and healthy and very loved. I'll see my dad next week.

When I decided in late 2009 to sell up and live my life as a vagabond, I didn't doubt it was the right thing to do. But I don't think I could have predicted how amazing it is to live this way, and how well suited to it I seem to be. I've been really blessed with people who have come along everywhere I've spent time and made me feel at home in their world. Thank you!
Posted by Robyn from Oz too 2 comments: 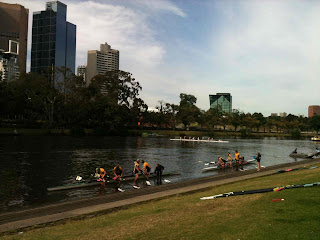