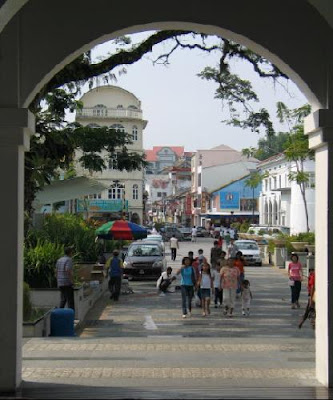 Kuching means "Cat City". I saw a bunch of cats in Chinatown at lunchtime, but I've seen only one dog in the two days I've been here. It's a complete contrast to Ubud, where dogs rule. I had lunch in a Philippine restaurant: stir-fried seafood and rice, and a watermelon juice.

This morning I ran up and down the waterfront a few times at around 7 am. I think the real action happens there at around 5, 5.30 am... At 7.30 I was still a bit early for a juice on India Street, though it wasn't too early to visit the Tua Pek Kong Temple.

I worked on a new job today, as well as on the textbook that I need to finish this week. I think I have a pretty good balance happening. I want to have time to do something new each day, and to experience the place I'm spending time in; but also, the work makes it possible to live this way, so I need to be respectful of schedules and the needs of my clients. I'm still really excited about my new life!

I made friends with Emily at the Chinese laundry around the corner today. Hotel laundry costs are outrageous, even at this lovely family-run hotel (www.limetreehotel.com.my) that I was lucky to choose to be my home for a month. Julie, the daughter of the family, solved an IT problem for me and has been super-helpful. She even found for me a hanging cloth wardrobe tidy, so that I can put everything from my suitcase in the wardrobe. (Jenny, would you believe I ironed everything I own today?)

After work I headed out and revisited Ramsay Ong at his gallery to have another look at the work I'm going to buy, and I called in again to see Derrick Chin at Asiana Gallery. There are a couple of his pieces at my hotel.

By accident, I discovered that Kuching has a cinema, on the ninth floor of a gaudily painted high-rise. Thankfully, most of Kuching's central district is still low-rise, with old shophouses and artisan streets. Great for wandering and exploring... For three bucks, though, I might have to go and see a few blockbusters.

The dragon boat teams were out training again tonight. Exciting to watch.

I took a tambang (small motorised taxi boat) over to the kampung (village) on the other bank of the Sarawak River. The astana (castle) that was the residence of the first to third rajahs of Sarawak from the mid-1880s is on this bank. These rajahs were British, but Sarawak didn't actually become a British colony until after the Second World War.

There are a couple of big open-air food outlets on the riverbank. I had seafood noodles (I can see I'm going to be noodled out after Kuching!) while listening to the Muslim call to prayer.

While I waited for the tambang back to my side of the river I got chatting with a bunch of young boys who were hanging out together at the jetty smoking cigarettes after footy training. The alpha male among them was very friendly and we talked about Australia and New Zealand, where he said he wanted to visit, and about Kuching, which I said I was very happy to be spending time in. They passed my card from hand to hand, enjoying recognising the reference to King Kong, then handed it back up the line to the alpha male who asked to keep it.
Posted by Robyn from Oz