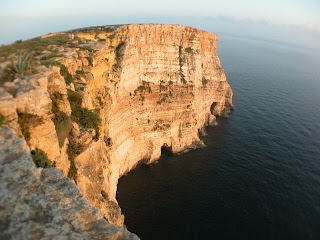 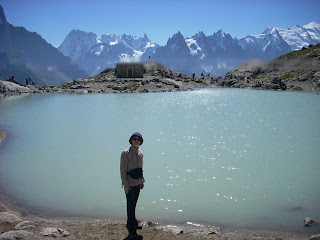 For my first-ever trekking holiday, I completed the two-week circuit of Mont Blanc, which has been described as ‘probably the most dramatic walk in Europe’. It was hard going at some stage on most days, and for most of the time on a few days. Basically, the walk links the seven valleys that surround Mont Blanc, the highest mountain in Europe, so we ascended/descended, or descended/ascended, up to three times a day, apart from our three rest days. The scenery was spectacular, with peaks, glaciers, mountain passes, forests and alpine meadows, and everything in-between. The trails attract a lot of day walkers, and are well supplied with refuges. We would greet oncoming walkers with 'bonjour' or 'buongiorno', depending on whether we were in France, Switzerland or Italy on any particular day. I managed to do a surprising amount of shopping in villages en route and even won an award for my high-altitude knicker-shopping abilities.
Posted by Robyn from Oz No comments: 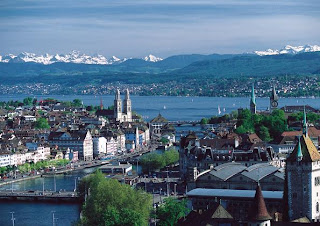 In September 2007 I spent a couple of days in Zurich prior to flying to Geneva to join a two-week trek around Mont Blanc, Europe’s highest peak. The town is very pretty, and a delightful place to explore on foot. Early on my second morning I ran an out-and-back course for 75 minutes alongside the River Limmat, in search of where it entered Lake Zurich. I wasn’t able to find the lake (how does one lose a lake?), but I did find a delicious cherry pastry at Bahnhaupthof railway station afterwards, which I ate on the way back to my hotel.