A Girl's Own Adventure in Borneo 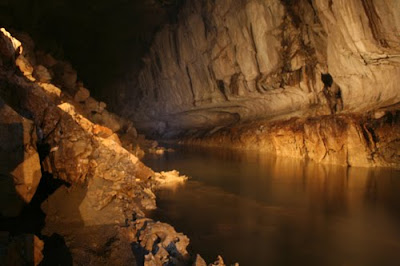 This is a preview of my second column about Sarawak...

When I emerged from the jungle on the last day of a four-day trek through Gunung Mulu National Park, in northern Sarawak, I was relieved to find I had provided lunch for only one of the half-dozen or so leeches that had chosen me as a possible meal ticket.

The Headhunters’ Trail is a dank-smelling, 11.3 km path once trodden by Kayan headhunting parties. Today, it forms either the start or finish of a trek that takes in some of the highlights of this UNESCO World Heritage-listed park. Our group of trekkers and guides had started out from park headquarters, near Mulu’s airport, after a night spent in basic dormitory-style accommodation.

The Mulu Caves are mindboggling. Lang’s Cave (a wonderland of dripstone formations) and Deer Cave (its cave passage would fit eight St Paul’s Cathedrals) are an easy 3 km stroll along well-maintained plank walkways from the entrance to the park. Deer Cave is home to an estimated three million small bats that emerge in waves most afternoons in search of insects for supper.

I enjoyed the Canopy Skywalk, about 15 swinging bridges suspended high up in the foliage.

The next morning, after a journey up the Melinau River by longboat, we visited the Cave of the Winds and Clearwater Cave, which extends for over 170 km and is popular with adventure cavers. Following a further stint on the river, including some whitewater longboating, we disembarked and walked for over 8 km through dense rainforest to our camp for the next two nights.

Camp Five is the starting point for an all-day return climb to the summit of Gunung Api to see the limestone formations known as the Pinnacles.

Readers of this column will know that I enjoy hard walking. The more effort a trek requires, the better I like it. However, I started to reconsider making the ascent when our guide, Han, described it as "a really, really high-risk activity". I think what clinched it for me were the hazard warnings, complete with 13 exclamation marks, on the map of the route on the information board at camp.

I decided to complete only the first of the three distinct stages of the climb, a distance of 900 metres, from where I could descend on my own. From there on up, it’s considered dangerous to descend unaccompanied. The final stage of 400 metres is traversed mainly on ladders; technically, it’s more climbing than trekking. And in a landscape with razor-sharp limestone outcrops, a slip could prove very nasty.

I really enjoyed the effort of clambering up to the first rest stop, sometimes using the ropes strung along the more difficult sections. The descent—which I made with a young English lawyer who was feeling unwell—was harder than the ascent.

Back at camp, I washed off the sweat and grime in the river, and then headed back out along the trail we had used to reach camp the day before. For two hours, I walked alone along that track through the Borneo jungle.

I am in awe of everyone who did the Pinnacles Walk, and feel some regret that I wasn’t among them. But, a girl can still have her own adventure.
Posted by Robyn from Oz