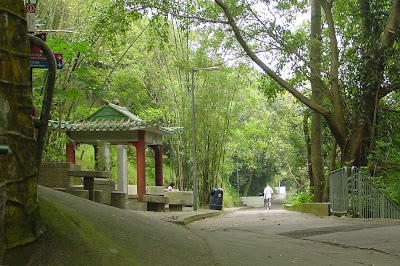 I spent last weekend mostly working, apart from having yum cha with Cath and David N on Sunday. I caught up with Cath when I was in Hong Kong early last year, and we’ve stayed in touch since then. We were all young twenty-somethings together in college at the University of New South Wales at the start of the 1970s, and now we are at the other end of our careers.

Monday morning I got “back on the horse” after my disastrous run two weeks ago, when I got heat stroke in Kuching in a 7K race. I walked up the hill to Bowen Road (shown here), where I used to run the 8K course frequently in the 1980s. I ran only a couple of kilometres, but it was enough to put some distance between me and my fears.

Had dinner at David N’s on Monday. Others there were a British dentist who has written three books on the history of the Macau Grand Prix, and his partner, a diamond valuer. David has offered me use of his villa in Croatia. Two problems: I’ll need a car, and I no longer drive; and it doesn’t have internet, so I wouldn’t be able to base myself there for anything more than a quick visit. I want to find a way around these problems, as it looks gorgeous and it’s a very generous offer.

On today’s early morning repeat visit to Bowen Road I got talking with the editor of an Asian finance magazine. Lara and I, and her young pup Gypsy, ran together for about 2.5K.

I’ve been working quite a bit from the Foreign Correspondents’ Club’s Main Bar, where there is reliable internet access. As I was leaving today to meet Carol for lunch, I saw Marty M, who I now know through my Melbourne pal Jenny. He had also been for a run this past week.

Carol and I had originally planned to go to China Tee Club, where in about 1988 get-togethers of what became the HK Women in Publishing Society used to be held. (Carol has been hugely important in getting “Imprint”, a publication showcasing the writing of WIPS members, into print each year.) China Tee was closed for a private function, so we went instead to Post 1997 in Lan Kwai Fong. In 1985, when this was still “1997”, I went there for dinner on my own during a business trip to Hong Kong. I decided that night I would try and return to Hong Kong to live. That decision changed my life.

I missed out on going to Cath’s book group tonight. The assigned book was Hilary Spurling’s “Burying the Bones: Pearl Buck in China”. I’m about halfway through it and I’ll take it with me to read on the train to Guangzhou (formerly Canton) tomorrow morning. I had to finish a job tonight, and technology was uncooperative so I was running late. I really wanted to go!

Instead, after I finished work, I had dinner in the main lounge here at The Helena May. (I’m staying in the annex, but I also use the main building for better internet access.) The place is so different from when I lived here. To its credit, it has totally reinvented itself as a very different restaurant venue in Central.

I haven’t had time for sightseeing this past week, but I managed to get to the Chilean artist Margarita Dittman’s exhibition on Hollywood Road. Fabulous. She’s only about 30 years old, but makes very complex, satisfying photographs.
Posted by Robyn from Oz