Memories of The Helena May (my home for the next month) 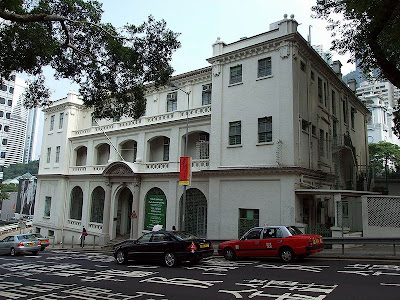 From April 1986 until mid-1988 I lived in a private club in Hong Kong, just uphill from the American Consulate and the lower Peak Tram station. The Helena May is a white, colonial-era building; during my time as a resident it had slowly turning ceiling fans and wicker furniture. It had been built in 1916 to accommodate young British women who had journeyed out to the colony in the hope of finding a husband among the ranks of the young colonial administrators or the traders in the commercial firms, or who were on their way to China to work as teachers or missionaries. During the Japanese occupation of Hong Kong after Christmas 1941, The Helena May was used to house Japanese soldiers and stable their horses.

When I was living there, it housed single "gels" like me who were in possession of a foreign passport and were in Hong Kong to work. It was sort of a boarding school for mature-age students, but with privileges that didn't include taking men to one's room. During the day, the club catered to the expatriate-wives-who-lunch-and-play-bridge set. It also had the best small library in Hong Kong.

I became pals with a group of Brits. Sarah worked for Swire, one of the oldest of the Hong Kong hongs (or trading houses). Swire owned Cathay Pacific, and Sarah was personal assistant to the head of Personnel. She had previously worked for a Harley Street specialist and at the Kuwaiti Embassy in London. Suzie worked in administration at one of the International Schools that provided English-style schooling for the children of expatriates. She also volunteered some of her nights as a Lifeline phone counsellor. Debbie, who had lived in Dubai before coming to Hong Kong, worked in fashion. She had a Muslim boyfriend who would turn up every now and then from the Middle East and whisk her off to somewhere exotic. She and I would sometimes go down to the squash courts near the Peak Tram station for a game of hit-and-giggle squash after breakfast. She was very glamorous and invested heavily in gold bracelets. Anne worked in finance. She was my "business manager", in that she would receive my faxes and bring them home to the HM at the end of the day. Imelda worked in the South China Morning Post Bookshop on the Star Ferry concourse, and Francesca was a journalist with the Post.

We would all start the day together at "our" table. After brekkers, my pals would head off down the hill to their various offices. (On Hong Kong Island, everything is either uphill or downhill from where you are.) I was now a fully-fledged freelance editor and working from home. I would go back upstairs to my room and gather up whatever job it was I was working on that day, along with my pens and corrector fluid. (It was all very low-tech in those days.) I would then set myself up at my table in the lounge and work all day until my pals starting drifting in during the late afternoon.

The lounge had a regular rhythm during the day. Club members would start arriving from mid-morning for a cup of tea with a friend, to exchange their library books, or perhaps to have a game of bridge. I must have been an enigma to those women: always there; always alone; my small round table covered in papers and books. My clients must have thought I had a secretary to answer my phone, when it was the staff of the club.

At around midday the place would fill up for lunch. The Helena May was a blessed relief if you were spending the day shopping in town. It was cool and civilised. The lunch menu offered reassuring choices along the lines of toasted cheese sandwiches and pumpkin soup. And their cheesecake was renowned.

After lunch, the lounge would empty. It wasn’t until school finished, around mid-afternoon, that the pace would pick up again. Mums and kids would have arranged to meet at the HM, so there would be another flurry of activity, with trays going to and from the kitchen and kids going to and from the library. It would all quieten down again after about an hour, and I would start to wind up my work on whatever new book I was editing on the trials and tribulations of doing business with China. By about 5.30, Sarah, Deb, Suzie, Imelda, Francesca or Ann would have drifted in and we would settle in the padded armchairs and have a natter about our day.

If any of us were known to have gone out the previous night and hadn't shown at breakfast, we were deemed to be "dirty stop-outs".

On nights when we went out, we would be let back in (if we weren’t being dirty stop-outs) by the night watchman. We would press a buzzer on the wall beside the side gate at whatever ungodly hour it was to raise John, who would be sleeping on a camp-bed in the kitchen.

"Thanks, John! May I have one of your cigarettes, please? I promise I’ll pay you back tomorrow."

"You been to nightclub AGAIN?" he would ask, handing over a fag or two.

…
Posted by Robyn from Oz