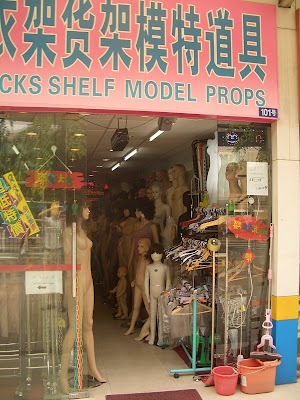 I’ve just spent a couple of days in Guangzhou (formerly Canton), China, where capitalism with Chinese characteristics is thriving. I stayed in the garment district, a good hour’s walk north of the Pearl River. I know this, because I walked there the afternoon I arrived and it was a very long return trip by taxi.

I went via Liuhua Park, which is at the southern end of the street where my hotel is located; I then headed in the general direction of the waterfront.

The covered market lanes in the old part of town along the river’s edge are quite incredible. There seem to be many dozens of them, all disappearing into the distance, all with similar goods for sale. The nature of the goods gradually changes as you walk along the street that leads into the lanes, but each lane caters to a distinct wholesale buyer.

I’ve just finished reading a biography of Pearl Buck, author of “The Good Earth”. She visited this part of Guangzhou in the 1930s. Today it’s been ruined (aka “improved”) by a modern road system with flyovers. I hate them. By the time I had navigated my way to the old White Swan Hotel, I was tired, very damp, and a tad bad-tempered.

While I decided on a refreshing drink from the menu in the riverside coffee lounge (a Peppermint Punch), I watched a man swimming upriver in the polluted waters with some sort of basketball attached to his body.

I waited ten minutes for someone to take my order, but was then told: “Wait.”

When I gave up on the Peppermint Punch and asked at the hotel entry for a taxi, I was directed to the second floor, well above ground level.

Eventually, I found my second taxi driver from hell for the day to take me back to my hotel just off Zhanqian Lu. (The first had delivered me there, shaking and quaking, from Guangzhou East Railway Station earlier in the day.)

The area where I was staying is a hive of activity. There are huge numbers of wholesale clothing outlets, firms that design and produce gorgeous shopping bags, freight companies, and suppliers of mannequins, racks, hangers and other display accessories. I’m assuming that most of the people who were staying in my hotel were there for some serious shopping.

It’s a good thing I wasn’t tempted to flash the plastic, or I might have come away with 3,000 pairs of knickers, minimum.

I decided to spend my only full day in Guangzhou catching up on work and checking out my immediate neighbourhood. I just couldn’t bear the thought of having to take a taxi to or from any of the main museums that I had been hoping to visit. I also gave up on trying to track down the elusive Ping Pong and Vitamin contemporary art spaces that I had read about. It was just too difficult, given the limited time I had available.

Besides, in China, time is money … and I had clients waiting.

Guangzhou is a city where you need to speak Chinese. I would return only if I was with a Chinese-speaking companion who knew people in the art scene, or if I had begun speaking in tongues.
Posted by Robyn from Oz