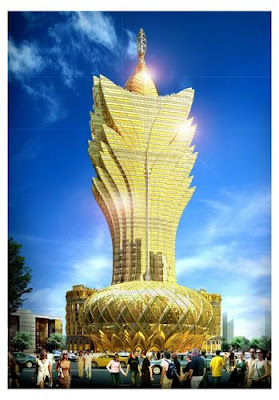 I love an audacious building, but some of the new hotel/casinos in Macau just look silly.

When I first started visiting this former Portuguese colony in the 1980s, the very modest Lisboa Hotel and casino on the Macau waterfront was the city's only high-rise building. Today, Macau (on the Chinese mainland) and the island of Taipa have been changed almost beyond recognition. This building, the Grand Lisboa, now towers over its aged relative. Reclamation along the waterfront and on Taipa has created space for dozens of spectacular, and some spectacularly kitsch, casinos. It's best seen at night, when the lights help distract from the tackiness of the place.

I'm not saying the buildings aren't "grand" and spectacularly fitted out, but they are casinos and they are there to attract mainland Chinese gamblers. Sleepy, laid-back, Portuguese Macau has been sold down the Pearl River for the sake of a lot of patacas.

I spent two days there this week with my long-time friend Polly and her partner, Charlie. I had a dicky tummy and didn't have much of an appetite, but I enjoyed doing my bit for the economy of Macau by playing the pokies at The Venetian and City of Dreams casinos (cashing in each time before I inevitably lost the lot), checking out the Macau Museum of History, wandering through the old shopping lanes near the ruins of San Paulo, and eating dinner at Fernando's on Coloane Island. The three of us also went for an early-morning walk up to the top of the hill near Charlie's apartment on Taipa, which provided great views of the casinos and across what's left of the river to Macau.

Oh, and I also saw a lot of loos during my visit.

Film note: I saw "Fish Tank" last Sunday with Cath and her daughter, Rebecca. Highly recommended for a grisly look at family dynamics in a run-down housing estate in England.
Posted by Robyn from Oz