What I did on my summer holiday, by Robyn Flemming, age 60

What an amazing month August was! After finishing up a road trip with Sarah in Ireland, I’ve been traipsing through Wales and southern England. I haven’t run since Ireland, but I’ve been doing lots of walking. First up was an ascent of Mt Snowdon with my English walking buddies, Tony and Jo. Phil and their dog George have now joined our intrepid threesome. While Tony and I were driving from Shropshire for our meet-up on the Friday, the others were doing a practice ascent in dismal weather. (Jo is about to do the Three Peaks Challenge – climbing the highest peaks in Wales, England and Scotland one after the other in one weekend – as a charity walk.) Luckily, the conditions were perfect on the Saturday, giving us great views over the valleys and to the coast. I didn’t find it too hard, and managed not to slip on the loose surface and stones on the descent, which had been my fear.

To Stratford-upon-Avon for the night at Jo’s mum’s place, where I got to meet their wacky new dog, Wolfie, then on to Cheltenham on Sunday to stay with Peter and Amanda. (We go back to the late 1980s in Hong Kong, but now catch up fairly regularly.) Jo and Phil drove me over from Stratford for the handover. We took a walk up on the hillside behind the house, and had dinner with three of their kids at an Asian restaurant. A great catch-up before they dropped me at Reading station.

Wendy and Chris met my train. (We met in late 2008 in Kathmandu.) We did a big walk around the town, some of which we had done a couple of years ago and all of which was beautiful. Afternoon tea of scones, clotted cream and jam at a grand country house called Avington Park.

The next morning, Wendy and I set off for a two-day holiday on the Dorset coast. On the Tuesday, we did a 12-mile walk along the coastal path that hugs the cliff-tops on what’s known as the Jurassic Coast. Absolutely spectacular views and a perfect day. We stayed with friends in an amazing house not far from Corfe Castle, where we had breakfast the next morning before hanging out on a nudist beach at Studland Bay for a couple of hours. The weirdest thing was watching the men who stand among the low grasses in the small dunes that line the back of the beach looking for action. I’m reading Paul Theroux’s book, Kingdom by the Sea, about his trip around the coast of the UK in 1982, and he mentions that this was a phenomenon on this beach even then. I got sunburned, which wasn’t something I ever expected to happen in England, even in August! 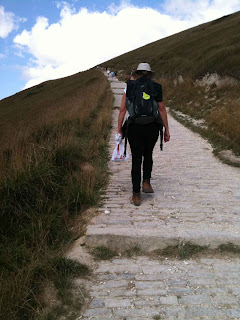 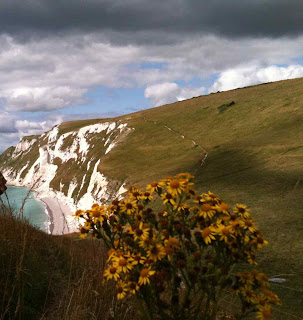 A fabulous week in the Welsh and English countryside with old friends, after which I felt in need of a home base and a recharge for a week.

Unfortunately, I didn’t get to see Suzie (a friend from Hong Kong) on my way to London. We couldn’t get our schedules to match after I decided to go straight to London. I stayed at a small hotel near Hyde Park and within walking distance of Oxford Street. My room was so small, I felt almost claustrophobic, but room to swing a cat comes at too great a price in London.

I spent the next week working, checking out exhibitions and a couple of films (“Alan Partridge” and “What Maisie Knew”, both featuring Steve Coogan), and seeing friends who live in or near, or were visiting, London. Lauren and Bill are friends from New York who have relocated to the UK for a few years. We run for the same team in New York, the Hudson Dusters, and were in competing teams in a 24-hour relay in Vermont in 2009. We had pizza in Islington and took a walk along the canal towpath. I used to live nearby in 1983 and never saw that part of London!

On Friday I caught up with Michael and Eddie in Hanover Street, where their antiques business is located. Michael was formerly an author of mine, but he has reinvented himself as a high-end dealer of gold and silver antiques from mainly Asia (far and near) and Africa. His showrooms are like Aladdin’s cave. They took me to dinner at the Cinnamon Club, near Carnaby Street. Fabulous modern Indian food. And I took them for gelato. Michael is always a hoot.

Saturday morning was a fun DRS (Dead Runners Society) encounter: a meetup with Jon, a Dead Runner from near London, with his partner Jennifer and a niece, Paola; and Nangel, from Portland, Oregon, with Mark and the two boys. Jon, Jennifer, Nangel, Mark and I were all in Austin, Texas for the 2012 DRS World Conference, and Nangel and I ran the Hippie Chick half marathon near Portland that May. Last weekend we met up at the site of the 2012 London Olympics on a dreary, wet London day. I couldn’t stay for the tour of the Olympic Stadium, as I was due to meet Linda back in town, but it was great to see everyone. 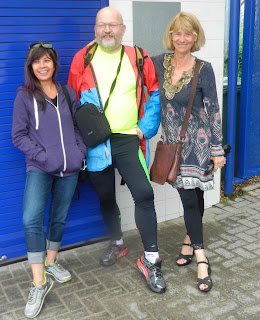 Linda was the first friend I made in Hong Kong, in 1985. She now runs a cosy retreat for couples and others at her converted barn and farm buildings in Cornwall. I stayed with her family there in 2007. She came up to London for a day and a night so that we could catch up on all our news in person. I last saw her, and her sister Pam, in 2010 in Exeter. We also squeezed in “What Maisie Knew” at the Curzon. After breakfast on Sunday, when we bounced all sorts of ideas around in our usual way, we said our goodbyes and I got the train to Oxford to see Gordon and Jo. 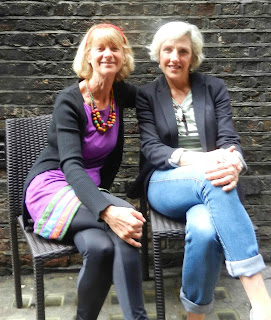 I met Gordon and Joanna in Albury, Oz a few years ago (2008?), when I was looking for an illustrator to work with me on a book idea. A friend suggested Gordon, and he and Jo and I have been friends ever since. They moved back to the UK a couple of years ago with their Westie, Jock, but are thinking of moving on again. Jo is a dentist, if anyone knows of a position going somewhere nice! Gordon is a writer, so (like me) he can work from anywhere. Jock isn’t fussed about where he hangs his leash. We walked for a couple of hours around Oxford after having lunch in a restaurant by the river. A beautiful day, and it was great to see them. 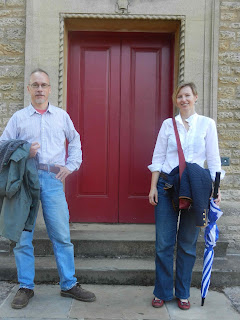 My last catch-up was at Paddington station before I got the train to Heathrow. Sallie and I worked together in the 1980s in Hong Kong for a travel guide publisher. I don’t think we’ve seen each other since 1989, when I stayed with her and Thomas in London before I headed for the Outer Hebrides, off the west coast of Scotland. (That was the furthest place on the planet from Hong Kong, and that’s where I wanted to be at that time.) It was like we had just stepped straight back into comfort and ease and fun together.

I am really very fortunate in having the friends I do. They are such a support to me, even when I don’t see them for years. I never take them for granted.

So, now I’m in Eastern Europe for a month for a rest!
Posted by Robyn from Oz