As the Czech Republic was once known as Bohemia, and Czechs as Bohemians, I felt right at home in Prague, being a bit of a bohemian myself. In the 1970s I shared a couple of houses in Sydney with a woman who had emigrated to Australia from Prague following the 1968 Soviet invasion of Czechoslovakia. I don’t think of her as a former friend, but I do regret my lack of curiosity about what she had gone through and what led her to leave such a beautiful city and settle in Oz. 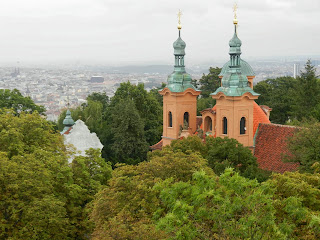 I didn’t use any public transport in the three days I was in Prague, as it’s a perfect city for getting around on foot. On my first morning I ran over the famous Charles Bridge and two other bridges on the Vltava River as part of a two-hour run/walk on the mainly cobblestoned streets. There are so many visual treats everywhere. I found a beautiful walled garden, part of the Valdstejnska Palace, where peacocks wandered about on the lawns.

There is a lot of public art, which I always enjoy, but the highlight for me was an exhibition of contemporary Chinese art in the grounds of Prague Castle. I just spotted a poster by chance and yelped with glee when I saw the exhibition was current and open. I was a very happy gal wandering through that artspace. 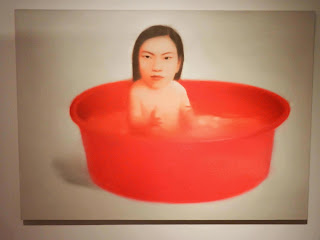 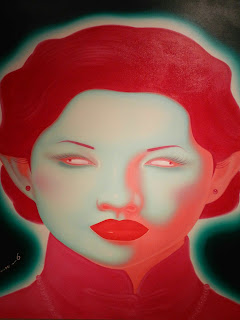 I stayed near Petrin Hill, in the very funky Vintage Design Sax Hotel. This big park has lots of paths and trails. I spent an hour or so wandering around, then climbed up to the top of the Observation Tower for views across to the Old City and up to Prague Castle. There's an interesting mirror maze to wander through. 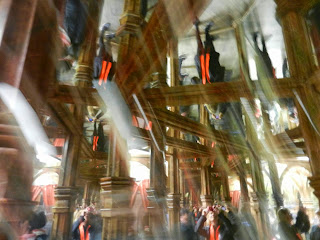 The Old City is stunning. I love the Church of St Nicolaus, the buttery yellow facades of apartment blocks, the art nouveau details on some buildings. Like the historic centre of Florence, this area is mainly pedestrianised and there are hordes of people following tour guides holding aloft little flags. I climbed to the top of the tower that houses the famous astronomical clock, for fabulous views over the narrow, winding streets and wavy roofs. 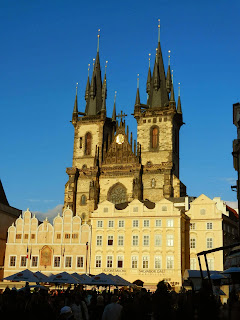 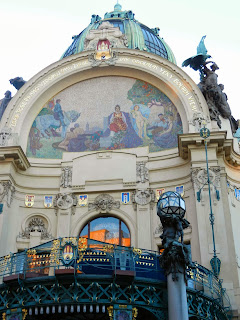 My friend Giorgio in Italy jokes that, like Budapest with its Buda and Pest sides of the Danube, Prague is split by the Vltava River into Pra and Gue. Both the Old City and the Lesser City are very appealing. The Kampa contemporary art museum on the river has an interesting permanent collection, plus I saw two temporary exhibitions: Klimt and some fellow Czech artists, and Pink Floyd’s The Wall designer and illustrator Gerald Scarfe. I liked best an illuminated cube that went from a dull grey to bright white, and back again, every couple of minutes; and a standing group of men made of plaster covered in hessian. The museum building was badly damaged by floods in June of this year, as shown in an outdoor display of photographs. 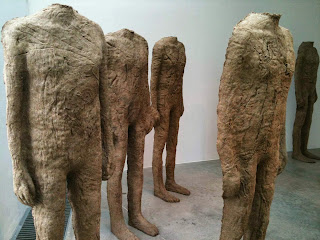 When I see this promo, http://www.youtube.com/watch?v=76Tl2jVl78o, it means I’m in an art house cinema somewhere in Europe and I’m about to see a fine film with English soundtrack or English subtitles. I’m like Pavlov’s dog: I start to salivate. On Saturday at Kino Svetozor I saw “Lovelace”, which was more about the blows Linda Lovelace received from her abusive husband than about those she gave. Some key scenes were revisited later in the film to give a fuller account of certain events.

At the Globe bookstore I bought Alex Kershaw’s book, To Save a People, about Raoul Wallenberg’s mission to save Budapest’s Jews in 1944, the “last Jews of Europe”. On the Jewish tour in Budapest Jules and I had seen the sculpture erected in his memory behind the main synagogue, financed by the actor Tony Curtis who is Hungarian.

I’m now back in Budapest for my final week before I return to New York via Dublin. I started my four-day getaway by taking a hydrofoil from Budapest to Vienna, which took about six hours as we passed through a couple of locks on the Danube. In a taxi on the way from the pier to my hotel in Vienna, I realised I no longer had my shoulder bag, which contained my passport, cards, money…  It was a horrible feeling: disbelief mixed with fear. Luckily, when I got back to the river, I found the boat had gone to refuel for the next day and hadn’t headed back to Budapest. I was reunited with my bag after an hour’s wait by the pier, where a swan kept me company for some of the time. I was very grateful that the whole incident ended up being nothing worse than a reminder of the need to be mindful.