One night in Neuchatel... 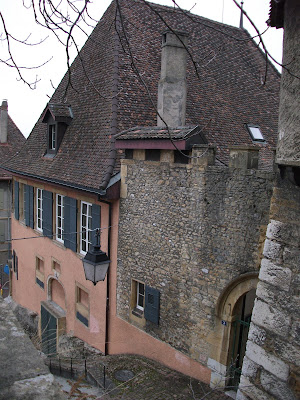 I had planned to stay for two nights, but the place was too quiet.

Liliane and I drove from Lausanne up to Lac de Neuchatel on Saturday, where we had a bit of a look around Colombier/Cortaillod (where I was entered to run a half marathon on the Sunday), Auvernier (where there are some very old vineyards), and Neuchatel. I had already decided to pull out of the race, but it was a good opportunity for an outing and to spend some time with Liliane. We had afternoon tea at a very grand hotel on the lakeshore, then Liliane headed off and I started looking for a hotel for the night. It turned out to be the last night of the World Championship Figure Skating competition and accommodation was hard to find. I was referred to Hotel Touring, which must have been filled otherwise with figure skaters who partied hard after the end of competition, judging by all the noise.

I ate dinner at a small brasserie but failed to include either chocolate or cheese, both of which Neuchatel is famous for, apparently.

The town dates back to the Middle Ages, and there are lots of beautiful old buildings and fountains, cobbled squares, grand public buildings (I visited the art gallery), quirky steps and funky window treatments. I loved the colours. It's all very well looked after, but on a late winter Sunday it was too quiet to keep me after I'd walked everywhere I was going to walk and had lunch at Les Halles. The big place on the hill in the centre of town that looked like a cathedral was shrouded in scaffolding, and none of the interesting-looking shops were open. Best to visit these places during the week, I think.

I took the train back to Lausanne, though I was very tempted to take the one to Bern when it pulled up at the next platform.

Squeezed in around all of this has been work, of course.

I have lots of excursions coming up over the next two weeks, and there is an end in sight to the full-on workload, at least for a few days, towards the end of the month.
Posted by Robyn from Oz