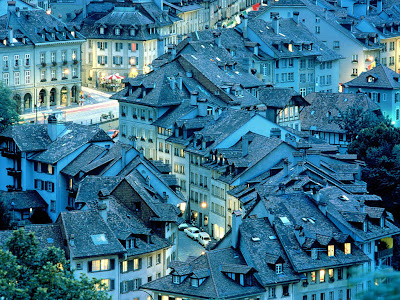 How come no one told me about Bern?

What a fabulous city! It's the capital of Switzerland but has a population of only about 130,000. It's about 500 years old, gorgeously situated on the Aare River, has stunning buildings (it's a UNESCO World Heritage site), and there are very funky shops in the lanes of the old town and along cobblestoned, colonnaded Marktgrasse. I went by train from Lausanne this afternoon when I created a window of opportunity for an excursion by starting work at 4.45 am. I didn't know anything about Bern and considered going only as far as Fribourg, which I thought would be more accessible for a visit of a couple of hours than a bigger city. So glad I went with Bern! I seemed to walk instinctively in the right direction, and then I couldn't believe my luck. I also found a great little cinema. I think a return visit for a night or two is on the cards.

Bern is very "German", where Lausanne is very "French".

Yesterday, I took the ferry across to Evian-les-Bains, on the French side of Lake Geneva. It's the old spa town where Evian water originates. There's a small old town area, a majestic former spa that now houses an art gallery and conference centre (I saw an exhibition of works showing daily life in 19th-century Paris), a casino and a marina. It's late winter and the town was very sleepy, but I had lunch and walked along the shoreline checking out the dogs.
Posted by Robyn from Oz