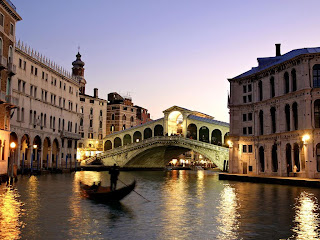 The merchant of Venice

On 24 September 2007, under a near-full moon, I ran with a local mountain runner through the laneways and across the canals of central Venice. I had made contact with Cristiano, who owns a shop near the Grand Canal, through an online running network. He offered to meet me at my hotel near Piazza San Marco for an hour-long scenic tour on the trot. We ran through the square, past people sitting out and having a drink in the balmy early evening. We ran past Peggy Guggenheim's former palazzo, now an art museum housing her collection of abstract and surrealist art collected between 1938 and 1979, which I had visited earlier in the day. I then lost sense of where we were, despite having already spent hours walking through the city. Cristiano’s English was good and we chatted easily, and I enjoyed his sense of humour. When we ran up the steps of the Rialto Bridge (built in 1591), I laughed when someone called out ‘On, on!’ as if we were hash house harriers following a trail through this wonderful thirteenth-century city.