On the roof of the world 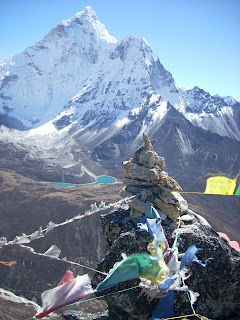 In October 2008, a few days after I ran the Melbourne half marathon in a time of 1:51:06, I flew to Kathmandu for a planned five-week trek to Everest Base Camp and through the Annapurna mountain range. I had visited Nepal in 1991, but this would be my first walk on the roof of the world.

Today was a very strenuous walk of about seven hours from Phakding to Namche Bazaar, at 3443 metres. Most of our route was up or down steep, stony paths. Ram, our trek leader, and our three guides remind us constantly that the safest way to walk at altitude is slowly.

Today was an acclimatisation day. To accustom our bodies to the altitude, we climbed to 3880 metres. We had very clear views of Everest and other peaks, which looked much closer than yesterday. The Hotel Everest View, unexpected in such a difficult location, was the obvious place to stop for a drink. At the back of the hotel is a large terrace with postcard-perfect views of Everest. We continued on to Khumjung village, which supplies many of the sherpas who support Everest expeditions, where we visited a school (closed) set up by the Sir Edmund Hillary Foundation and the Khumjung Ghompa (monastery), which has a relic supposedly of a yeti's skull.

Twenty minutes later, as I was clambering down the steep slope with Dinesh, one of our guides, I lost my footing and fell backwards, landing badly on my left hand. When I tried to stand I felt faint. After the dizziness had passed, Dinesh and I walked very slowly back to the teahouse, where Ram said I needed to see a doctor.

On 29 October, after two days of X-rays and tests at a clinic in Kathmandu, my broken wrist was set during an operation under general anaesthetic at OM Hospital. During the week I spent in Kathmandu arranging a return flight to Australia I met an English trekker, Wendy, who was a welcome support and has become a great friend.