"Third mummy on your right" 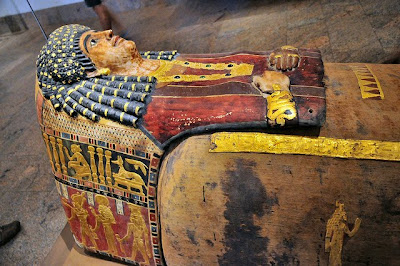 I'm just LOVING spending time again in New York.
Some people who were new acquaintances last year have become good friends. Tamar and I caught up three times this week, twice for 6-mile morning runs in Central Park, and today for some wine and chocolates on the lawn in the park with her new friend Arn, from Vancouver, before catching some of the Black Sea Roma Festival (a celebration of gypsy music) at the Sound Stage. I walked home through the park and saw parts of it I hadn't seen before. It was really heaving; so much was going on.
On Thursday, Holly and I went to see "Catfish", one of the two films about Facebook that have just come out. I found it compelling. We're planning to see "The Social Network" when I'm back from Pennsylvania. Holly and I are planning a big walk this week if the weather is kind.
Yesterday morning, I ran about 8 miles in the park with Rich and Katie, who I met last year through the Hash/Hudson Dusters, Eddie (a blind runner) and Kim (a journalist with "Shape" magazine and formerly with "Glamour"). Kim led Eddie for the first six miles, then Rich took over. Eddie's a bit of a comedian.
I've been back in the city for three weeks and have already run in three events :-)) The T-shirts quickly start to mount up! Last Sunday, Heather (from the Dusters/Hash) and I ran the 18-mile Marathon Tune-Up together. She made it so much more bearable; it was even quite fun. And today I ran the 5th Avenue Mile and did a better time than I'd expected: 6:59. I placed 5/31 in the 55–59 category and 19/102 in the 50–59 group.
So, the last week has mainly been devoted to taking my training up a notch and working at my desk. I did manage to check out a few of the ancient Egyptian exhibits at the Metropolitan Museum of Art this morning when I called in to pick up my membership card and to use the loo before the 5th Avenue Mile race. "Just past the third mummy on your right," the attendant said, when I asked for directions.
I caught up before the race with Josh, a friend from the Dead Runners Society who I met last year in St Louis at the DRS World Conference. He ran the race in the wave after mine. We then went for breakfast with Akshay, a former colleague of Josh's at IBM.
A busy week of just living here...
Posted by Robyn from Oz