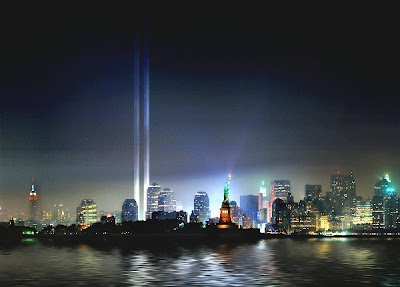 Tonight, being the ninth anniversary of 9/11, I went down to the World Trade Center to see these lights. They are moving to see, but the area itself is still an ugly construction site.

I'm reading a novel based on the history of four families whose stories go back to the earliest days of New York (New Amsterdam) and up to 2001, so I skipped ahead to the 9/11 chapter while I ate dinner in an Italian restaurant on Greenwich Street before walking a little way to the site.

This morning I ran my first race since I suffered heat stroke in Kuching in a race in June.

The day was gorgeous – a perfect blue sky, and not too hot. I ran the Fitness Mind Body Spirit 4-miler in Central Park in 33:34 minutes, which wasn't bad considering I'm not running-fit at the moment. I was going to run it at a very easy pace, but a race is a race and ... what can I say? I gave it my best shot. I placed 6th woman out of 59 in my age group. Last year I was 6th in my first ever race in New York, which really surprised me. Today, I'd actually hoped for a higher placing, but the field was too strong. Even in the next age group, 60–64, five of the top women had faster times than mine.

I run races in New York as a member of the Hudson Dusters team. As a team member, you don’t just get to contribute points; you get a support network. I ran the first part of the race with Heather, a fellow Duster I met last year. Her husband, Joe, called out my name to encourage me at around the halfway mark; and Andy, another Duster, cheered me on closer to the finish. It really helps!

For my non-running friends, 4 miles (6.4K) isn’t a long way when compared to a marathon (42.2K) or even a half marathon. But whatever distance a race is held over, you give it your all. A 5K race can hurt far more than a 15K run.

After the race (I know I raced it, because I nearly threw up twice after I crossed the finish line), I introduced myself to a 77-year-old French New Yorker who I learned has been running since the 1970s. She came in just a couple of minutes after me and was first in her age group. I gave her my card, and I'm hoping to have a chance to hear her story next week.

After listening to a band in the post-race area perform a fantastic version of Aretha Franklin’s “Respect”, I walked over to the Emerald Inn, on Columbus Avenue, to meet some fellow Dusters. It was good to talk with Tim (who ran part of my farewell Three Bridges Run last year) and Bill (who was really helpful to me in the last leg of the Green Mountain Relay in Vermont). The TVs in the bar were showing the 9/11 memorial service and reading of the names of the victims. Tim knew one of them.

Yesterday I ran with Tamar, who I haven't seen since my last day in New York last year. She was one of my teammates in the Vermont relay. (Our team was called “New York Running Chicks and a Few Dudes”.) She and I ran a couple of loops around the bridle path in Central Park, and then she did a third loop. We picked up coffees from a Cuban restaurant near my place (Tamar has been to Cuba, where I want to visit next year) and scrambled egg and cheese rolls from a deli nearby, and then sat on a stoop to eat our breakfast. It's good to pick up where we left off. We're running again on Monday.

After working all afternoon I went over to New York Road Runners to register for today's race, and to the Metropolitan Museum of Art to renew my membership. I was mainly interested in seeing two photography exhibitions, one of which was shots by Leon Levinstein of New Yorkers on the streets, from the 1950s to about 1980, called "Hipsters, Hustlers and Handball Players". 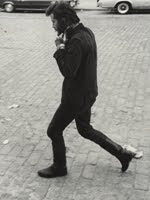 Speaking of photographers, my friend Norbert Attard will be staying with me next week. I met Norbert in Albury when he was an artist-in-residence prior to the opening of the new Albury Library/Museum in 2007. I then spent a week as editor-in-residence at his studio in Malta, on the island of Gozo, later that year. He has been doing a residency in Washington, DC, and will be working on a project here next week, just a few blocks from my apartment.