There may be moments in the next few years when I question my sanity in embarking on a life as a global nomad. But they are unlikely to be when I’m running with the Hash House Harriers in Sarawak, or walking across England with my American friend Michele, or trekking to the top of a volcano in Bali.
The prospect of running, hiking and walking my way around the world doesn’t faze me in the slightest, though it would probably be some people’s worst nightmare.
The preparations for my departure in late May went into a holding pattern this past week, though, when I was asked to front up for ‘further evaluation’ following a routine mammogram. After seven further x-rays and an ultrasound, I was given the all clear. It felt like too close a call. Possibly two or three of the women in that waiting room with me weren’t going to be as lucky as I was.
I’m even more determined now to live life to the fullest.
I haven’t always done that.
The early to mid-1990s was a dark time in my life. I had spent the previous two decades working in publishing in Sydney and Hong Kong. I loved my work, and I loved the opportunity Hong Kong provided to travel widely in Asia and beyond. But towards the end of the nearly eight years I spent running my own business there, I wasn’t coping well with the stresses of everyday life. When I started having anxiety attacks, it seemed time to leave.
After a year back in Sydney, I moved to Brisbane. From there I moved back to be near my family in Albury. I was basically all over the shop, and was smoking heavily to try and keep a lid on my anxiety.
A few months after my return, I took up running again after a break of some years. And that’s when I started to find my feet. Within little more than a year, I had trained for and run a marathon. Along with a feeling of wellbeing, I also regained my sense of humour and optimism, and I was lucky to make some terrific running mates.
I then started to become involved in the local art scene. I found friends there, and started to build a collection of paintings and, later, photographs.
So, the Border has been very good to me as both a runner and an art lover. But it’s with dogs that many people in Albury-Wodonga associate me.
In 2002, when my dogs Charlie and Butch were just pups, I formed the Albury-Wodonga Dogs’ Breakfast Group. Eight years on, I’ve met hundreds of dogs and their owners through our monthly get-togethers. I never tire of hearing their stories.
In the last few years I’ve resumed travelling, including doing some marathon treks. The bug has bitten me hard, and I want to do more. Luckily, my job as a freelance editor allows me to work wherever I have access to the internet.
We have a very special community here on the Border. I’ll miss so many people – and dogs! But it feels like the right time to divest myself of most of what I own and take off on an excellent adventure. I really hope you’ll join me on my journey.

The Merchant of Venice 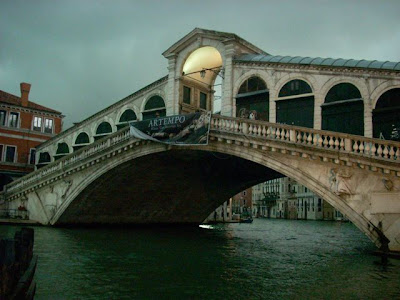 In September 2007, on a night lit by a near-full moon, I ran for an hour through Venice with an Italian mountain runner and shopkeeper named Cristiano. I had just completed a two-week trek in and out of the valleys that encircle Mont Blanc, Europe’s highest mountain. I was on my way to Malta, to the island of Gozo, to be editor-in-residence at the studio of artist Norbert Attard, who had visited Albury some months before as part of the opening celebrations for the LibraryMuseum.
My merchant of Venice and I are both members of an online running community. He had responded when I asked for someone to accompany me on a run along the canals and over the bridges of this most beautiful 13th-century city.
Visiting runners might join in the jogging tours that start in Piazza San Marco at 7.30 am, daily in summer, and on Mondays, Thursdays and Saturdays in winter (www.runningtouritaly.com). Another company offering morning running tours of up to an hour is Allegro in Venice (http://allegroinvenice.com/en/tour-1.php). I haven’t run with them, so I can’t vouch for either of these businesses.
There are few places as thrilling, rewarding and safe for the walker as Venice. You will never be far from the incredible Grand Canal, quick crossings of which by traghetto (a wide gondola in which passengers remain standing) provide a very cheap thrill. (When I first rode in one of these, my knees were shaking so violently I thought I was going to capsize us. It didn’t help that I had faced the wrong way and was too afraid to try and turn around, and that my fellow passengers were all staring at me.)
A number of private walking tours (eg, www.bellinitravel.com/venice/walks) offer insights into the city’s architecture, history and art.
On my agenda in the future is a trek in the nearby Dolomites. I’ll tell you more once I’ve sampled what’s on offer.