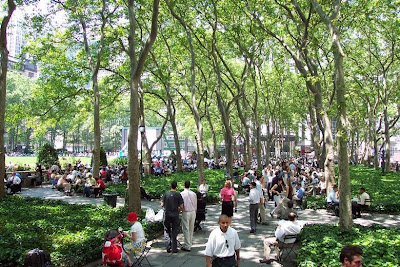 My first day back in the Big Bagel has been a very busy one. I worked in my room at the Chelsea until about 2 pm on the monthly newsletter job that I always have to cancel any previous plans for. It was sent to me 15 minutes after my plane left Sydney, so I was way behind in starting work on it. Next I had my hair cut by Gladys of Mr Roberts Haircutting at the Affinia Manhattan Hotel on W 31st Street on the recommendation of a doorman at Macy’s. I’ll go there again when I’m back in September. I then took the subway up to the Roseland Ballroom on 53rd Street to pick up my race number and goody bag for Sunday’s half marathon in Central Park. A trio of heavily accented Russians asked me how to get down to Battery Park, and in my heavily accented Australian I pointed them in the right direction. The first woman to officially run a marathon in the States (Kathrine Switzer, who jumped in and ran Boston many decades ago) was talking at the race expo. She’s all for mixing up a half-dozen pairs of training shoes and as many different types of surfaces as possible during training. I walked from Roselands (remind me to tell you about this place) down to Times Square and then along to Bryant Park to eat my lunch in the sun with the beautiful people. The Empire State Building tower was poking above the buildings that line the south side of this square where New York Fashion Week is held. When I walked around the corner to the New York Public Library (where Carrie was meant to wed Mr Big), I was looking straight at the Chrysler Building. After checking opening times for tomorrow, I walked back to the Chelsea. I was out again just after 7 pm to meet up with Kathy W (who flew in this morning from San Francisco) and her friend Jody (who drove down today from Boston) for dinner over on 2nd Avenue near 54th Street. Kathy and I have quite a long history now, but she and Jody have been friends since they were c. 12 or 13. Some very funny stories about their road trip to Kansas in a Buick when they were 21, and about K’s whitewater rafting exploits on the Zambezi River. I came back to the hotel to find that my email with this morning’s job attached hadn’t gone through. After a lot of fussing about, we determined it was never going to go through, so we went to Plan B. Meanwhile, a job came in from the Philippines that needed to be done there and then. So, it’s now midnight in Manhattan and my day’s work is done … hopefully.
Posted by Robyn from Oz