Keeping it weird in Austin, Texas 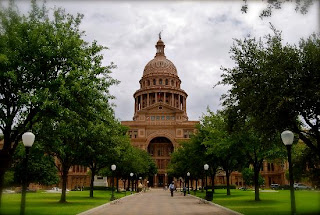 Capitol building, start of the Austin marathon and half marathon

I'm now in Austin, Texas, for a Dead Runners Society World Conference. It's a rather glorified name for a get-together of members of an online group of runners from all over the States and further afield who like to talk about running and everything else under the sun. I've been part of DRS since 1996 and have made some close friends through the group, including Kathy & Karl (last seen in Santa Clara in late 2010), Ellen (last seen in Singapore last year), Pam (Pennsylvania's Hershey half marathon), Ian (San Francisco) and Jane (Oakland). This weekend I met some other Dead friends for the first time, including the founder, Chris, Nangel, Rietta, Brigitte, Marc, Carl, Becky... I also enjoyed talking with Jon and Jenny, from the UK. Four Deads ran the Austin marathon yesterday, and a big bunch of us ran the half marathon. Andrea from Albuquerque kept me company on what was a slow run for her. We clocked 2:00:03. I was 13th out of 147 women in my AG. I think I can attribute 3 minutes to the hilly course and 3 minutes to my poor fitness, so I now have a reasonable gauge for the rest of the year.

We've had various lunches and dinners as a group. Did a river run this morning with Kathy, Carl from Michigan, Dan from Louisiana, Jeff from Montana and Connie from Boston. Lunch at a barbecue place with founder Chris and Jane from Oakland.

My last couple of weeks in NYC were very busy with work. I caught up with friends Selma and Murray, whom I met in Santiago, for dinner; went to a Swedish film at Scandinavia House and had dinner a couple of times with Lisa; ate at John's pizza restaurant in Harlem with Lorraine and Phil from Melbourne. (I ran with Lorraine in Melbourne back in August, and before that in Kuala Lumpur in 2010.) I also finally got to spend an hour or so with Maite and Wanda, whose house I was living in! Very interesting and lovely people. I hope to see them in the summer when I'm back in New York.