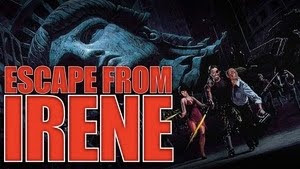 Since I flew into New York last Monday we've had an earthquake, a hurricane, and tornado warnings. It seems my spell as Bringer of Gorgeous Weather is over! Hurricane Irene ended up being a bit of a fizzer for us New Yorkers. We dutifully emptied supermarket and hardware store shelves of torches, batteries and bottled water. We filled our bathtubs with water to flush our loos if the power went off. We evacuated (or not), and we stayed off the streets. But nothing really happened... CNN was trying to keep the fear factor going, but it all got a bit silly. Which is not to say there weren't people and places badly impacted by the storm (touted as a hurricane "the size of Europe" and "unprecedented" in its potential to cause damage to cities along the east coast), but Manhattanites aren't likely to put their lives on hold again so readily the next time a big storm threatens.

I caught up with Gordon and Joanna again on Thursday for "afternoon tea" (not a traditional tea, but a bite to eat at tea time) at the Algonquin Hotel. There is no longer a round table; instead, an oval table presides under a painting of the "New Yorker" writers and editors who used to meet here regularly for lunch and to share witticisms, criticisms and general bitchiness.

The hurricane danger has passed, and I have a marathon to get trained for. As Dorothy Parker said, "You might as well live."