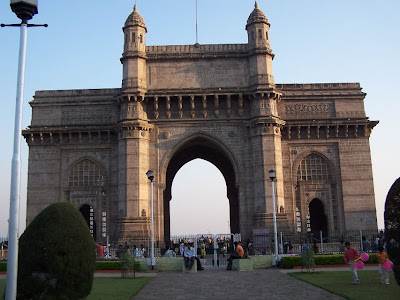 It's been a case of Mumbai madness over the past week. My artist/illustrator friend Uma, whom I met in Malta in 2007, met my plane in Chennai very late on Wednesday night. My suitcase didn't make it, though it caught up with us two days later in Mumbai. I stayed with Uma and her sister Subashree for the night before Uma and I flew to Mumbai on Thursday morning. Terrific flight across the country. Quite barren and wild in parts, especially the Western Ghats.

We checked into the Taj Palace and Towers Hotel, just across the road from the Gateway of India. The Taj was one of the sites of the November 2008 terrorist attacks, and the security in the vicinity of the hotel is very tight. We went to some fabulous clothes markets opposite Crawford Market, where I bought some tops and leggings. Also checked out the fabulous Victoria Terminus rail station (VT), also a site of the 2008 terrorist attacks. We went to see a new-release Bollywood film on Thursday night at a cinema just near the hotel.

Friday until mid-afternoon was devoted mainly to seeing art. We met my running friend Sanjay at 3 pm in the rather funky little Samovar Cafe attached to the Jehangir Art Gallery, close by the National Museum of Modern Art. He and I then walked to where the running expo was being held for the Mumbai marathon and half marathon, to pick up our race packets. We met up again in the evening at the Cricket Club of India for drinks and then had dinner of crab at a nearby seafood place.

Saturday morning Uma and I took a ferry over to see the Elephanta Caves. She was a brilliant tour guide, as she could explain the significance of the various groupings of Shiva and co. We had a late lunch at the Leopold Cafe, another site of the 2008 attacks, where a very friendly Australian couple bent my ear for about an hour.

Sunday was the half marathon. I picked up Sanjay at 5 am, and we went together to the start at Bandra. A crowded start in the dark at 6:15, but after a couple of kilometres I found my stride and then maintained a pretty steady pace. We ran over the Sealink and along Marine Parade, beside the bay. It reminded me of the Melbourne half marathon a few years back! My final time was 2:10 (my slowest half time ever, I think) and I placed fifth in my age category (67th out of c. 1360 women overall). I saw the two Ethiopian women winners of the marathon sprint to the finish, with only a second separating them. Walked back to the Taj for a big breakfast.

Sanjay pulled a calf muscle about 15K into the run and had to be doped up to walk to the finish :-((

In the afternoon, Uma and I took a taxi out to see an exhibition of works by Anish Kapoor, a London-based Indian artist. I was really taken with the huge installation called "Shooting into the Corner", which involved pots of red wax being fired at a high white corner space using a cannon. Fantastic!

Back at the hotel I settled down to do some serious work.

In the late afternoon, Uma headed off to stay with her cousin for a couple of days before flying back to Chennai tonight. It was great to spend time with her, and I hope I can get back to Chennai sometime as there was no chance to see anything of it this trip.

Caught up with Sanjay and his wife Reetu at the Cricket Club of India again last night for drinks, and for dinner at a great little place near the Taj called Indigo. I'm going to head off there again now.

It's been fabulous meeting Sanjay after getting to know him over the last couple of years through the Dead Runners Society.

I've been struck by the number of dogs that lie sleeping by the roadsides in Mumbai (let sleeping dogs lie?), and by the amazingly gaudy horse-drawn carriages that ply their trade here in Colaba. I just saw one pony whose back legs were slipping all over the place on the cobblestones.

Tomorrow night I fly back to Malaysia – Malacca – until the end of the month.
Posted by Robyn from Oz