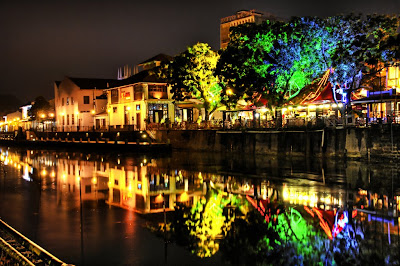 I've been very lucky again with my accommodation. Courtyard @ Heeren is a heritage building that has been very nicely revamped as a boutique hotel, and it's in a perfect location: parallel to the famous Jonker Walk in Malacca's Chinatown area and just a few minutes' walk from the really gorgeous Malacca River. The staff are very friendly and have really gone overboard to make me feel at home. Most guests come for a few days over the weekend from KL or Singapore, whereas I'm staying for 11 days. I've been here a week already; I leave on Monday for Chiang Mai.

Malacca has a very rich history going back to about the 1200s or 1300s. The period of the Sultanates was followed by Portuguese rule from the 1500s, then the Dutch, followed by the English. The Japanese occupied it during the war, then the English took over again before Malaya became independent Malaysia. It's a very multicultural place, like all of Malaysia, so there is breadth as well as depth to it.

Chinatown is a great area to stay, and especially just now in the lead-up to Chinese New Year.

I particularly love the river that winds through town. It's more like a canal, and is lined with cafes and homes and heritage buildings. I ran along it one morning this week and late one afternoon.

I've been working very hard while I've been here (a couple of 4 am starts), but I've also tried to see something of interest each day. There's a whole bunch of museums close by. I've visited the art gallery and a couple of historical museums. I also saw a fascinating exhibition called "Enduring Beauty" (about deforming the body in the name of "beauty" by scarification, tattooing, neck rings, lip plates, foot binding, etc). There's a nice walk up the hill to the ruins of an old church with a very unsympathetically positioned (by the British) ruined lighthouse in front.

Yesterday I went to Kuala Lumpur to meet up with two work colleagues (and Facebook friends) at the Islamic Financial Services Board. Really enjoyed catching up with them again after meeting them for the first time in 2007.

At lunch today I met a woman from South Carolina who is travelling in a very intrepid fashion around Asia for three months with her eight-year old granddaughter. They'll be in Chiang Mai while I'm there, so we may catch up again.

This past week has also been about thinking ahead. I've entered a half marathon in Turkey in April, firmed up plans to walk in England (the Cotswold Way) in May with Tony and Jo (pals from last year's Coast to Coast walk across England), made plans to visit Luxembourg (for work) and maybe Germany for pleasure after the walk. And more...
Posted by Robyn from Oz