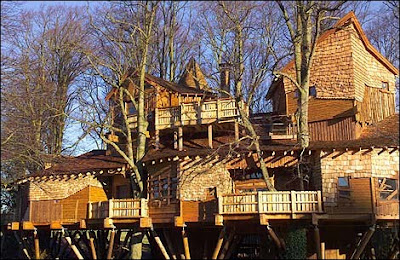 I'm now in Alnwick (pronounced "Annick"), on the coast north of Newcastle, staying at the Tate House B&B. Somewhere south of here, during the train trip up yesterday, I would have crossed the route of the Coast to Coast Walk, which I'm doing, starting next week, with my Dead Runner friend Michele.

When I got to know my friend Suzie in Hong Kong in the mid-1980s, she was known as "Trees". It's funny that, all these years later, we should have dinner together in a treehouse!

The Tree House restaurant is on the grounds of Alnwick Castle and Gardens and is like something out of a dream ... or a nightmare.

Suzie and I travelled rough in Rajasthan, India, in 1987 for three weeks when she was returning home to the UK from Hong Kong. We then caught up again for a night out in Hong Kong in 1990 when she was visiting with her husband David from their home in Singapore. Since then, she has raised two great kids.

Suzie, Charlotte and I had a drink at The White Swan before joining David and Will for dinner. While we walked back to Bondgate afterwards the kids bandied around names for a pair of cats. Rosencrantz and Guildenstern were two of their suggestions. You've gotta love well-educated kids!
Posted by Robyn from Oz