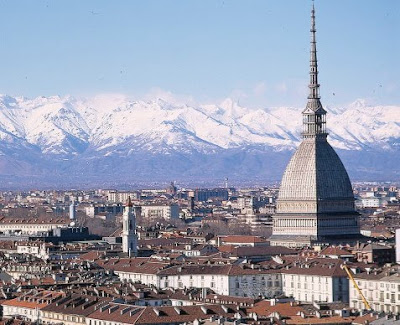 OMG, I wish I'd been born an Italian!

But to backtrack a little...

My last day in Hong Kong was spent seeing the mind-boggling film "Inception" with Cath, and having dinner at the FCC with Polly Waffle, Mary and Ian (who I'd run into at Cheung Sha Beach on Sunday). I had a great time during my five weeks there.

On Wednesday I flew to Kuala Lumpur, where I stayed at a very unusual guesthouse called Sekeping Tenggiri, in the Bangsar area. My room, the Glass Room, was perched at tree level. The bathroom was partly open to the sky, and I could step out of the room on to the wire mesh roof overlooking the small pool. The bed, on a wire mesh base, was on a raised platform. I thought it was a bit hazardous. You wouldn't want to stay there if you had a tendency to go walkies in the night...

I managed to have two runs, which I hope will get me back on track with my training. The first was with Jess ("Jess Do It"), who I met, with her husband Stephen, in Sarawak on the Headhunters Trail. We ran circuits of a park in Petaling Jaya, across the state border from KL (for Albury friends, Wodonga would be the equivalent), then had dinner at a noodle place. They gave me a ride back to the guesthouse and came in for a look. They both work in the interior design/drafting field. It was great to see them.

On Thursday morning I took a long taxi ride to the Petronas Twin Towers so that I could run in the park at their base. I ran here in 2007 in the lead-up to the Hong Kong half marathon. I just love these towers. I ran part of the way with an Australian woman who is based in KL with Oz Immigration. I took the Metro to Bangsar and had some laksa for breakfast, then made my way back to the guesthouse by a circuitous route. (In other words, I got lost.) I spent the rest of the day working by the pool while a thunderstorm raged.

Unfortunately, my Islamic Financial Services Board friends got caught up with an Islamic Finance forum and weren't able to make dinner this time.

A great flight to Rome. I was wedged between two blokes in the centre aisle (I hate that), but I took half a Xanax and slept for about six hours on and off (I love that). Transited in Rome to Torino (Turin). A fabulous flight: clear blue skies, very smooth flying, and views of the island of Elba (where Napoleon was imprisoned) and then of the towns from Genova inland to Milan. I was sitting next to a very dapper chap who turned out to be the ambassador to Italy from Belize (where my friend Sue F is hoping to move from Portugal) and was formerly ambassador to Cuba (where I'm hoping to spend December 2011). He gave me his card and said if there was anything he could do... (No, I wasn't in first class; there was only the one!)

My friend from the Dead Runners Society, Giorgio, met me and drove us back to Torino (home of the Shroud of Turin), where I'm staying at the Art Hotel Boston, a very funky little establishment. I only said "Shit!" once as G sped down the highway in his souped-up mobile office. I'm dubbing him "the Alfa male". 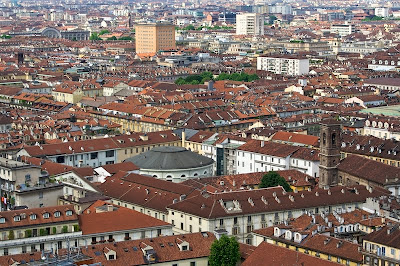 We had a fabulous pizza for lunch at a place in Turin, then I worked on a new book back at the hotel for a few hours. G picked me up at 6.30 to go and see his parents at the house where he lived as a child. His mum just broke her leg and is back home recovering. We then took a walk around the old city, which was quite heavily bombed during the war. It's just beautiful. There are towers and walls dating back to Roman times, and some fabulous grand buildings. Torino was home to the first king of a united Italy. There are lots of public squares, and colonnaded boulevards, and narrow cobblestone lanes overlooked by uniform stone apartment buildings with little balconies and wooden shutters. Giorgio told me that the buildings would have been occupied in the past by all members of society, with the rich folk on the lower levels, the petit bourgeoisie on the middle levels, and the artists and the poor in the garrets at the top. We saw where Nietzsche ("What doesn't kill us makes us stronger") and Puccinni (La Boheme, Tosca, Madame Butterfly...) lived.

Dinner was fabulous: a degustation menu of about six courses with a delicious local wine. Ah, Italy!

This morning we're doing a long scenic run. Then we're driving up to Sansicario, in the mountains bordering France, where I'll meet Giorgio's family and we'll walk up a mountain or two.

It was Giorgio who put me in touch with Italian Dead Runner Cristiano, my Merchant of Venice, when I contacted DRS Italia in 2007 to ask if anyone would like to do a scenic run with me there.

Ciao for now!
Posted by Robyn from Oz