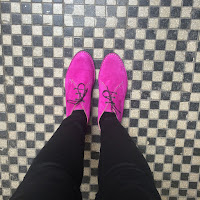 Somehow, a planned week's holiday in Portugal with Miki turned into just that: a holiday! No work appeared in my in-tray from the day our holiday started until the day I returned.

What a fabulous destination! We hired a car, so we had the flexibility to see the highlights between Lisbon and Porto, just inland from the Atlantic coast (including the westernmost point of Europe). We covered quite a small area in total, but Portugal gives you lots of bang for your buck and you don't have to drive very far between places worth seeing.

I immediately liked Lisbon. Sintra and its palace were pretty, but we suspect we didn't see as much of the place as we should have. We both loved the walled city of Obidos, where we walked the wall just before the rain started at around breakfast time.

In Nazare we took the cable car up the cliff-face to an upper town for great views of the town and beach (which looked very like an Australian beach).


In Alcobaca and Batalha we saw some incredible monasteries, the latter one being my favourite for its very stark, unadorned, soaring interior.

We didn't have any sightings of angels or virgins in Fatima, where we lit some candles for family and friends. Just outside of the town the next morning we visited some caves that are 100 (or 200?) million years old.

Mid-journey we spent a day in Coimbra chilling and shopping. I had my best dinner of the trip at an Italian place on the river: seafood risotto. We had been sampling Portuguese tarts every day, but from here on we wouldn't find ones to beat the ones we had in Obidos, Alcobaca and Coimbra.

We spent two nights in Porto, which we both liked. I loved the steep-sided river and mass of bridges, one of which I ran across. Cable cars and funiculars are popular in Portugal, and we jumped on every one we saw.

We decided to take the train back to Lisbon instead of flying, which was much the better choice. I decided not to do the Lisbon half marathon that I was entered for. I wasn't trained, the arrangements for the 35,000 runners to get to the start were complicated, and thunderstorms were predicted. But basically, I was just a wuss.

I lucked out with a Jewish film festival at a great little cinema not far from our hotel, where I saw five films over the two days we spent back in Lisbon.

Miki was a great travelling companion: even-tempered, flexible and funny.

Our flight back to Budapest was delayed for three hours because of a strike by French air traffic controllers, but the flight itself (via North Africa to avoid France) was smooth. I was very aware that I felt I was coming home when we landed at 4 am.


Posted by Robyn from Oz too