Not one to do things by halves

Kuching roundup
Two 5.30 am runs with Min last week; laksa breakfast with Mas and Jun to hear about Jun's involvement in World Kindness Day; dinner with Emily; and a farewell dinner with the Damai Run crew (the Wees, Shein and Peter, Ivy and Swee, and their boys Nick and Keiren) and Belinda (Eng Hooi was in Sibu with the athletics team he coaches). We're planning to go to Myanmar for the water festival next year, as Shein is Burmese.

Bali half marathon: #4 for 2012
The Wees and I have decided that if anyone asks why I'm introduced as "family", when they are Malaysian Chinese and I'm Caucasian, we'll just explain that I'm adopted...

This weekend Min, Sam, Sara and Sean Wee and I ran our second race outside of Sarawak. (The first was a half marathon and 10K in Kuala Lumpur last month.) We flew together to Bali last Friday, and were met at the airport by Gede, whom JB and I got to know when I was last in Bali in December 2010. We picked up our race packs in Sanur before heading for the hills and Ubud. 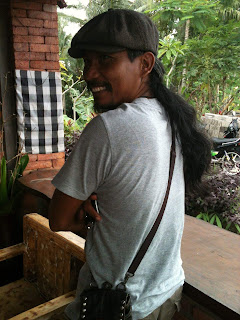 Sam, typically, chose a special place for us to stay that does good in the world. I've never met anyone who is as unselfconsciously kind and good as she is. Plus she has a wicked sense of humour :-)) Suly Resort and Spa, on the outskirts of Ubud, is associated with a school for disadvantaged kids/hospitality training centre and a meditation retreat. It worked for us for our four nights' stay. 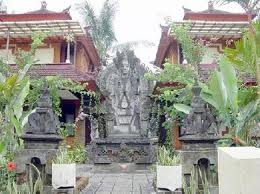 Gede didn't bat an eyelid when we asked him to pick us up at 3.30 am on Sunday to drive to the start of the half marathon near Gianyar. He has been great company for all of us during our stay. He, too, shares his good fortune with those who are less fortunate.

The start of the half marathon was well-timed at 5.30, as it was damned hot by 7 am. The best part of the course was the small villages we ran through, where the roadsides were lined with young kids dressed in traditional costumes or crisp school uniforms, waving flags or noise-makers, and cheering us through the corridors of outstretched hands. Sometimes there was a gamelan orchestra playing in a roadside temple, or a barong dancer. It was really uplifting and I had tears in my eyes a couple of times. 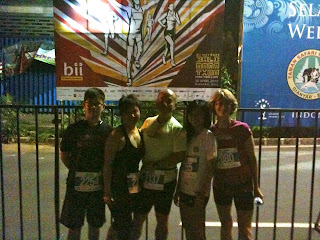 The half marathon course shared some of the marathon course, so that we were twice lapped by the front runners, all Kenyans. The third marathon runner snatched my water bottle from my right hand as he ran past me, which some boys sitting by the roadside thought was hilarious. There weren't any water stations for a long distance in the middle of the course and he obviously was feeling the need to get some fluids. I had time to duck into a warung and buy a replacement, which was a luxury the elite athletes didn't have!

We all finished around our expected times, though Min was really pleased to do his best time so far in a half.

Yesterday afternoon we caught up with Cat Wheeler, whose book has been reissued as "Bali Daze". It's a terrific read. She autographed the Wees' copy, and they got to meet the animals she writes about. 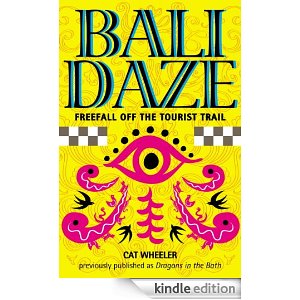 At Batubulan we watched a kecak and fire dance performance. Love the chanting by mostly old guys from the village; very hypnotic, which is why it culminates in one guy walking through and squatting in a pyre of burning coconut husks and emerging unscathed apart from blackened and smoking feet. 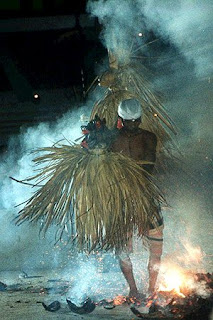 Dinner afterwards at an open food market where Sam doled out extra servings for the kids hanging around and wanting money handouts.

We ate at Clear on Jl Hanoman, Cafe Wayan on Monkey Forest Road, Cafe Havana on Dewi Sita (where Karma and the other staff do fabulous salsa dancing) as well as some places Gede knew of that do local specialties.

After a farewell breakfast this morning I've been tidying up some work loose ends before I fly tonight to New Zealand via Brisbane. The Wees and I are meeting next in Italy, in September, for the Bologne half marathon!