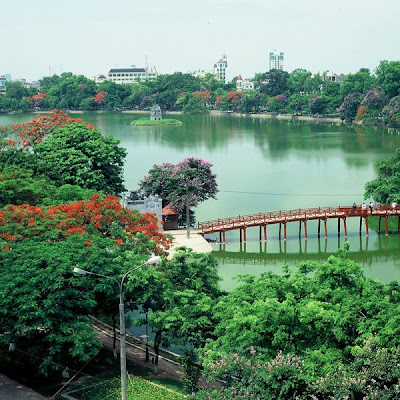 On a recent visit to Vietnam, I attended early morning mass in Ho Chi Minh City’s Notre Dame Cathedral. I hadn’t risen at 5 a.m. with the intention of seeking forgiveness for my sins (I’m a lapsed Presbyterian), or even of admiring the interior of this landmark building constructed by the French colonialists. In fact, I had set out from my hotel in the opposite direction along Dong Khoi Street, intending to run alongside the Saigon River. But even at that very early hour, I was simply too much of a chicken to attempt to cross the road. I took the easier option and retraced my steps.

The traffic in both Saigon and Hanoi, in the north, is horrendous. Although there are traffic lights, they provide pedestrians with only a tiny window of opportunity to commence crossing the street before they are borne down upon by a phalanx of mainly motorbikes, but increasingly also cars, vans and buses.

Here’s how to do it: When you get a walk sign, start walking … and don’t stop. You won’t have the road to yourself, but motorcyclists and drivers will make their way around you if they can see that you are moving forward in a predictable fashion. If there are no traffic lights, watch for a momentary easing up of the flow of traffic and then start walking. (Be mindful that cars and buses aren’t as manoeuvrable as bikes.) Once you step into the flow, don’t hesitate, or turn back, or start to run; be watchful and take evasive action if necessary, but basically keep moving steadily forward.

After a couple of days I started to enjoy the adrenaline rush. I even found it quite addictive.

I have a good friend who is very active in the Saigon Hash House Harriers (www.saigonhash.com), but I was in town at the wrong time of week to run with them. I’ll save that for my next visit.

While in Ho Chi Minh City I spent two days trying to be of help at the Christina Noble Children’s Foundation (www.cncf.org). The Centre was started in 1989 by Irishwoman Christina Noble. (I read her books "Bridge Across my Sorrows" and "Mama Tina" many years ago.) Twenty years later, CNCF has changed the lives of countless street and destitute children, both in Vietnam and Mongolia. I donate my time to edit the newsletter for the Australian arm of the organisation (www.cncf.org/en/news/view.php?id=1310), and I sponsor a teenage girl in Mongolia, so I wanted to see for myself how it all worked.

I was shown the ropes by three volunteers who were each spending three months working at the Centre. We assisted with feeding, brushing teeth, and playing with babies, toddlers and young children with disabilities ranging from blindness and spina bifida to dwarfism and cerebral palsy. I felt quite useless, but I did what I could. Inevitably, my heart went out to a couple of the children whose faces I can still summon up at will.

CNCF does an amazing job, but it’s dependent on donations. A great way to assist the Foundation in its work is to fundraise for them while participating in cycling challenges, sponsored walks, and the like. If you’re interested, see the newsletter for some upcoming Charity Challenges.

Like Ho Chi Minh City, Hanoi is built on a river, but for me its most charming feature was Hoan Kiem Lake, very near the old city.

When I visited Hanoi I had just run a half marathon in Hong Kong, so I was content to take early morning walks around the lake after first negotiating the half-dozen road crossings that lay between my hotel and its shores.

I’m a fast walker, and it didn’t take me long to walk a full circuit of the lake. I quickly found that the fun lay in checking out how the people who used the lake for their daily exercise regimen kept changing every half-hour or so.

The earliest users congregated on the steps of department stores and near other areas where loudspeakers that had once broadcast Communist directives now blared disco music as a background for mainly women performing vigorous arm and leg exercises.

On my second circuit of the lake those women would have disappeared, to be replaced a little further along by couples playing badminton.

Next circuit, the muscle boys with their weights would have made an appearance.

Always, there were walkers and runners.

Two men I saw on my first circuit on my first day at the lake caught my attention. The slightly chubby, cheerful-looking man of Chinese appearance who ran alongside his little dog, I christened ‘Mr Chin’. The thin, grey-bearded Vietnamese man who race-walked, I dubbed ‘Uncle Ho’, after Ho Chi Minh, whose embalmed body I had seen lying in state the day before.

We each greeted the other, with a nod of the head or a lifting of the hand, during our second and third circuits of the lake.

On my second day I hoped to see them again, and was pleased when they appeared. Again, we greeted each other whenever our paths crossed.

On my final day, I was tickled pink when, on schedule, I again saw ‘Mr Chin’ and ‘Uncle Ho’. During each circuit our greetings became more and more effusive, until on my final go-round I veered towards them and shook their hands. We patted each other on the back, and smiled sheepishly at the pleasure our encounters had given us over three days – all without having exchanged a word.

That afternoon I joined the Hanoi Hash (www.hanoih3.com) for a run in a rural area north of the city through rice paddy fields, small villages and a lightly forested area where the North Vietnamese Army had once trained to fight their adversaries in what is known in Vietnam as "the American War".

DON’T MISS: Breakfast of pho (beef noodle broth) at a roadside stall; drinks at the Caravelle or Rex hotels in Saigon; purchasing a beautifully executed copy of a favourite painting.
Posted by Robyn from Oz